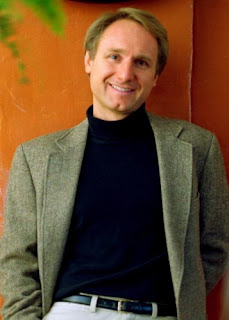 My short review of The Lost Symbol gave away little of the plot, but if you plan to read the book, this post might reveal more than you want to know.
The villain of the piece is a maniacal killer named Ma'lakh, who has kidnapped Peter Solomon, the head of one of the most prominent families in the United States. Brown's symbologist hero, Robert Langdon, wants to do what he can to save Solomon, one of his closest friends, but a high ranking CIA officer named Inoue Sato who heads the operation against Ma'lakh has other things on her mind. She insists Solomon's life is trivial compared to the damage Ma'lakh might do to the nation's security with a weapon he posseses. Every time she shows characters what this weapon, they immediately accept her perspective.
The potentially disastrous weapon, when revealed, is this: Ma'lakh ascended to the top ranks of the Freemasons and, while doing so, shot secret ceremonies in which prominent Americans participated. If he sends that video file to media outlets, it has potential to undermine the US government.
Apart from the fact that this matter would come under the purview of the Department of Homeland Security rather than the CIA (there's a reason Brown needs it to be the CIA, but I won't get into that here), the video recording did not occur on government property, infringed no national security laws, and harmed no individual. Yet, preventing its dissemination it is taken to be more important than saving the life of a US citizen.
I'm certain the book's assumptions will disturb those who seek to protect First Amendment freedoms. On the other hand, The Lost Symbol will heal relations with one constituency Brown has previously offended: Christians. Not the literalists, but certainly those of a spiritualist bent, of whom there are millions in the US.
Posted by Girish Shahane Girish Shahane at 2:56 PM

Wait a minute, you have a plausibility problem with a Dan Brown novel?

Hehe. In The Da Vinci Code I could see why many people might want to stop Langdon from getting to the truth; in The Lost Symbol even that layer of plausibility has disappeared because there's no major hidden secret involved.