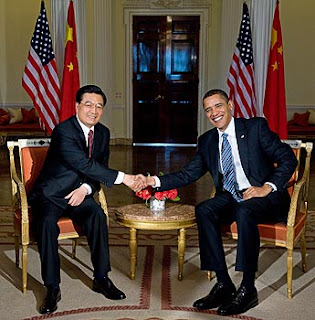 The mainstream media, aided by hawkish commentators like Brahma Chellaney, have in the past few months consistently pushed the idea of China's supposedly aggressive anti-India posture. This trend has reached an absurd extreme with reactions in this morning's papers to yesterday's US-China joint declaration. In the past, Indian diplomats were prickly about the slightest interference in what we call our 'internal affairs' even when the affairs are bilateral or multilateral. In the current scenario, bureaucrats and politicians have behaved responsibly, while media reactions have been over the top.
The lead article in today's Times of India adopts a tone echoed in numerous publications. Titled, 'US wants China to police S Asia?', the piece by Saibal Dasgupta and Indrani Bagchi quotes a sentence from the US-China joint statement and proceeds to over-read it:
'“They (US and China) support the efforts of Afghanistan and Pakistan to fight terrorism, maintain domestic stability and achieve sustainable economic and social development, and support the improvement and growth of relations between India and Pakistan,” the joint statement said.
This is a rare occasion when a US president has acknowledged that Beijing has a role to play in the India-Pakistan relationship. The move, if serious, runs counter to predictions of US foreign policy experts that the US would not acquiesce in a future Chinese hegemony in the region.'

This, by the way, is not the first time that a US-China joint statement has mentioned the India-Pakistan relationship. A little over a decade ago, when Bill Clinton travelled to Beijing, the two nations signed a declaration devoted entirely to South Asia. It called for a far more activist (intrusive if you like) role for the two nations, and explicitly mentioned the Kashmir dispute as an area which called for intervention:
'Reducing Tensions and Encouraging the Peaceful Resolution of Differences between India and Pakistan
We are committed to assist where possible India and Pakistan to resolve peacefully the difficult and long-standing differences between them, including the issue of Kashmir. We
welcome the resumption of dialogue between the two countries and encourage them to continue such dialogue, and we stand ready to assist in the implementation of confidence-building measures between them, and encourage the consideration of additional measures of this type.
Responsibilities of China and the U.S.
China and the United States have long sought friendly relations with both India and Pakistan. We reaffirm this goal and our hope that we can jointly and individually contribute to the achievement of a peaceful, prosperous, and secure South Asia.'
Posted by Girish Shahane Girish Shahane at 9:54 AM

Given that China has provided Pakistan with nuclear weapons on the sly, along with weapon systems specifically aimed at India, it is a bit much to now ask China to "support the improvement and growth of relations between India and Pakistan"!
China supports some of the most oppressive regimes in the world - North Korea, Mynmar, and to say nothing of it's policies towards Tibet and its own people, and Taiwan.
Pakistan and India have enough problems without adding China to the mix.

Shivani, I'll write more about Tibet in another post, but on what do you base your assertion that China has provided Pakistan with nuclear weapons?
China and Pakistan have been strong allies for half a century, it is natural the selling of military hardware would be part of that friendship. If India and Pakistan resolve their differences, there'd be no need to use any of those weapons.
Since the end of the Cold War all relationships have been recalibrated and China, like the United States, has moved to a less combative relationship with India than in the past. Of course, we can't be allies until we resolve festering issues related to border demarcation.
The point in the present context is: compare the text of the Clinton - Jiang Zemin statement to the Obama - Hu Jintao one. The latter, you will surely agree, is innocuous compared to the earlier document.

Not that telling China what to do ever worked...
But you're right, the sheer weight of China's economic success must be taken into account in its evolving relationship with the US. Of course, by buying so much US debt, China has an even greater interest vested in US economic success. They not only need the US as a market for their goods but need US treasuries to retain their safe haven status.

adrian is spot on. this is realpolitik. Pratap Bhanu Mehta was correct in his analysis on why democrats are warmer to the Chinese than to Indians. The US-Pak-China pressure point isnt going away anytime soon.
the americans know how much indians like pomp and style which is why the State visit next week isnt going to amount to much. MMS is going to come back with some public sweet talk, a private ticking off for not talking more with pak and a lecture ahead of copenhagen.And talking of the State visit, is MMS going to be wining and dining while we're having 26/11 memorials? Leaves a bad taste doesnt it ? s anad

SA, if this is the article to which you refer: http://www.indianexpress.com/news/the-liberal-paradox/526490/0
,
I am struck by the complete lack of evidence adduced to back up the hypothesis.
India had an old habit of grandstanding which didn't necessarily work in its favour. The last example of this was Kamal Nath, who relished his role as blocker-in-chief of the Doha round, mistaking intransigence for independence. Now we have a more constructive approach under Anand Sharma and Jairam Ramesh things might actually get done at the multilateral level in ways that help India as well as the world.

Girish:
"China provided Pakistan with weapons grade uranium for two bombs in 1982, according to notes made by the father of Pakistan's nuclear weapons program, the Washington Post reported Friday. "
This story was also reported widely, even in Pakistani newspapers, no denial has been given.
George Bush took over the role of sheriff and decided that the US had to police the world, he stripped the UN of all authority, one expeced Obama to step back from that and let The UN mediate in areas of conflict. Making China the Sheriff's deputy is not the way to go.
I agree we must not read too much in this statement, but, am adding a quote here from Nitin Pai's blog "Zbigniew Brzezinski, like many others who came of age during the Cold War, believes that a bipolar world is much easier for the United States to ‘manage’ than a multipolar one. That might even be correct. The problem is—the world is not bipolar—even in the face of China’s emergence as one of the world’s great powers. Instead of dealing with the world as it is—an eminently realist enterprise—Mr Brzezinski recommends dealing with the world as he believes it ought to be. Earlier this year, after commemorative event in Beijing, he called for an ‘informal’ G-2 comprising of the United States and China."
(Mr. Brzezinski offers advice on foreign policy to President Obama).

http://news.yahoo.com/s/afp/20091113/wl_sthasia_afp/uschinapakistannuclear
"Pakistan on Friday angrily rejected a US newspaper report that China provided the nuclear-armed Muslim state with weapons grade uranium for two bombs in 1982."
I don't believe Obama takes too much foreign policy advice from Brzezinski; he's one among dozens of advisors, and hardly central to the administration. The fact is we will have something like a bipolar world emerge in the next decade if China keeps its GDP growth at current levels.

Just read the WaPo article, which also contains this line: "According to Khan's account, however, Pakistan's nuclear scientists kept the Chinese material in storage until 1985, by which time the Pakistanis had made a few bombs with their own uranium. Khan said he got Zia's approval to ask the Chinese whether they wanted their high-enriched uranium back."
So, first, the allegation is only that China gave Pakistan enriched uranium, not, as you stated, nuclear weapons. Second, according to the same account that is used as the basis for the story, Pakistan didn't use that uranium.

The story of the Pakistani nukes (the missiles, uranium, technology etc) has several versions, whichever one you subscribe to - China has some part in it. Which is fair enough given their close relations, the point I am trying to make is:-
No country, big or small, welcomes third party interfence so why does the US keep trying to do it, and now get China to do it too. I also think, whatever China does behind the scene, they are not stupid to say they want to play a role.
P.S. If the U.S had said the same to Russia, the Pakistani's would be yelling too.
And now will read your bit on Tibet :)

I agree with Girish - apart from being gratuitous and condescending there is nothing objectionable in the purported statement. The next time MMS visits Cuba, Vietnam etc. - we should also issue some joint statements about supporting good relations between China and X. If said travel does not happen then an 'all party parliamentary resolution' would have to do.

It’s my opinion that you are “at young” when you say that “desire to see an improved relationship between two nations does not constitute playing a role in that relationship”, coz everyone’s aware of US desires and the actions that emanate out of those desires. Similarly, “playing a role in the relationship does not imply hegemony in the region”, not sure if we can call this innocence or ignorance. If US and/or China have had the slightest of desire to see improved bilateral relationship between India and Pakistan, it would have been one of the best gifts “the people of Pakistan” would have ever been granted in all their history. It was in the interest of US that Pakistan remained the way it was, be it for supporting the Taliban to oust Najibullah regime or to keep a growing India militarily occupied. As for China, it is in its interest that Pakistan be used to poke India and to keep the largest-geographically-closest-democracy at bay to avoid permeating the democratic thoughts/ influence on its vast majority, leave alone the Tibet issue. So today, maybe even if Pakistan (by some divine intervention) wants a peaceful relationship with India, the world doubts if US and China will allow it to.

Just in case, you would want to be refreshed with the US’ hypocrisy between its desires and actions, you may want to re-visit issues like Iraq war, the Afghan crisis or curtailing of nuclear arms or the CTBT or many such issues. Of course, I am sure you would agree that no country can beat US in juggling and suiting English terminologies to meet their own context, be it on Climate change or on agricultural subsidies.

All said and done, “it is one thing to desire and hope, it is another to sincerely let that happen”.
Chandru

You are right, Chandru, all countries are evil and duplicitous except India, which stands as a beacon of honesty and freedom.

Your sarcasm, noted. Though India may not be the beacon of honesty and freedom, at least it is better placed than the TWO (not all) countries with regard to the duplicities of foreign policies.