Among those honoured at this year's Mumbai Film Festival was the Greek auteur Theodoros Angelopoulos. The hosts MAMI (Mumbai Academy of the Moving Image) apparently couldn't find a person worthy of presenting the citation to him, and opted to bring on a group that included Rohan Sippy, Ashok Mehta and the director duo Abbas-Mustan. 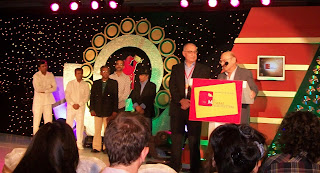 You can see the brothers Abbas and Mustan Burmawalla on the extreme left of this picture, dressed, as always, in white from shirt to shoes. They're listening intently to Angelopoulos's acceptance speech (thank you, Sankalp, for the info and pic).
After this interaction, I hope Abbas-Mustan familiarise themselves with Angelopoulos's films, starting, I suggest, with Ulysses' Gaze; Angelopoulos, meanwhile, ought to dip into the body of work created by those who honoured him on stage. Taarzan: The Wonder Car might be a good place to begin.
Next year, MAMI should felicitate Jean-Luc Godard, and ask Dharmendra and Jeetendra to present him with the award and speak of how influential Godard's vision was for them in the 1960s and 70s.
Posted by Girish Shahane Girish Shahane at 12:31 AM

Ha ha!! And look at the television and press friendly citation given to him! What a disaster.

Not to mention the backdrop...

thats the problem with the bollywoodisation of cinema in india. everything is tacky 70s masala tripe. why A-M you think ? Sai paranjpe, amol palekar or the guy whose made natrang - cant remember his name.... werent available ?swati

What is wrong with Taarzan: The Wonder Car? I thought it was a wonderful film, and it gave the world a phenomenal actor: Ayesha Takia. What would the world be without her?

Ha ha ha! The sideshows at MAMI are always more entertaining. Poor Szabo, the year he came they put him up at Juhu when the entire festival in those days was at the NCPA and the Y B Chavan auditorium. Their sensitivity doesn't seem to have improved. This year it was all greek to them!

At least Abbas-Mustan seem to be listening, unlike Ashok Mehta who's busy striking a pose in his hat!

Is that the citation, Mukul? It looks like front of the lectern - which Angelopolous seems to be holding on to as if he needs it to stay afloat.

Sorry to note that I found this post filled with smugness and mockery and suggesting a promotion of a class system akin to caste system that certain people should not be in certain places which belongs to "superior intellectual" few. As narrow-minded as it sounds I hope we are not closet junkies watching Govinda, Dharmendra and Karan Johar in private moments and then claiming holier than thou in public spaces.

Just for the records, I am not justifying Abbas Mustan or some such but I found the tone here supercilious.

You are right, Jabeen. I thought it was a huge plaque, like the massive cheques handed out to cricketers, so TV cameras can get a good shot of the big money.

Anonymous, I am certainly not a closet junkie. Are you suggesting that every film is as good as every other? If not, how can we differentiate without being accused of fostering a 'class system'? At the end of your note, of course, you say you don't justify Abbas-Mustan's films. In which case, why bother with the reply? If you actually thought the Burmawallas made masterpieces, I'd understand, and we could take the discussion further, but you can't bring yourself to do that.
This is a typically ill thought out exercise in promoting what superfically seems like egalitarianism battling elitism but is in fact a failure to contend with the idea of quality in any field.