Vietnam and the spectre of Osama 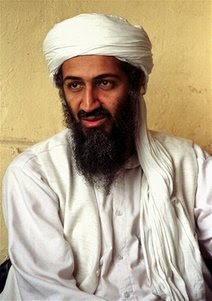 The major lesson American politicians learned from the quagmire of Vietnam was this: they could contain the outrage caused by the killing of hundreds of thousands of foreigners, including civilians (though the dissemination of gruesome images and stories had an impact), but couldn't afford significant losses to their own forces. Accordingly, after Vietnam, the United States opted for a war strategy that involved days or weeks of carpet bombing from great heights combined with missile strikes, guaranteed to cause substantial collateral damage but minimising the risk to American troops.
Yesterday, the American Senate released a report revealing the downside to that strategy. It confirmed beyond doubt that American troops had Osama bin Laden cornered in Tora Bora back in December 2001, and chose not to pursue him with massive force. It seems illogical that an army would launch a war specifically targetting those responsible for the 9/11 attack, only to let the leader of the pack get away. The only explanation is that a ground offensive in Tora Bora would have cost many American lives, something Bush and Rumsfeld baulked at allowing. They sent in a mere 100 American commandos along with a few battalions of Afghans and backed these up with the usual barrage of air strikes. The result, the Senate report confirms, was that bin Laden escaped across the border, the Afghan insurgency was boosted and a new one developed in Pakistan.
Donald Rumsfeld is reputedly a keen student of history, so I'm surprised the actions of generals from Alexander to Chingis Khan didn't teach him the importance of pursuing an adversary relentlessly, across countries and continents, until his capture or killing. Obviously the lesson of Vietnam trumped these earlier exemplars.
Posted by Girish Shahane Girish Shahane at 12:57 PM

I think you have to parse it a little. Rumsfeld's presiding demon was arrogrance. The CIA field officers on the ground told him that the troops needed to be reinforced in at least battalion strength and preferably divisional strength (the 82nd or 101st Airbornes could have done the trick) - he knew better. He knew better than the CIA, the Generals, the stategists and of course he knew nothing. Even Bush whose only virtue was his devotion to his underlings had to fire him in the end. A deeply arrogant man who unlike say Robert McNamara didnt have the brains or the wisdom to back up his arrogance.

Above Rumsfeld was Cheney who was driven by politics as you say. If it could be done with few US casualties then the political dividends would have been enormous.

Above Cheney (some of the time) was Bush who was just overwhelmed by the job. Bush's laziness and incompetence meant that a decision wasnt taken quickly enough when it mattered: 9/11, Tora Bora, Katrina etc. etc. You dont need to be intellectually gifted to be President of the US but you do need to be able to make a decision quickly. Bush couldnt.

If I had to pick the three worst men to be running that operation, I dont think I could have chanced upon three more likely candidates than Cheney, Bush and Rumsfeld.

Great analysis, Adrian, I take your point. The Senate report confirms that generals had a plan for blocking bin Laden's route to Pakistan, but Bush-Cheney-Rumsfeld ignored it. The idea of bombing mountains from on high and hoping one of those explosions will kill your target down below is crazy, no?
These people loved using the 'you can run but you can't hide' rhetoric. Actually, you can run as well as hide if reliable men don't pursue you.
Don't know for certain if capturing / killing bin Laden would have saved your brother some time in Afghanistan, but it seems likely.

Girish but then he would have missed out on trying Qorma Alou-Bokhara wa Dalnakhod, which he loved.

i think they never wanted to capture Laden at all. 'coz if they did, then the war would have to stop at some point, if that happened, then trillions of dollars would be lost.Too many people, and too much at take.Alternatively, The arms and ammunition deal would have to squarely depend on some new conflict,maybe not in the literal sense, like Iran, or some other new region for this to continue.

Capitalism and fairness are strange bedfellows.