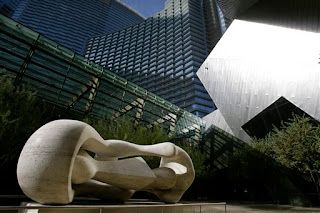 The two cities have a few things in common: built in the desert, stuffed with grandiose architecture, obsessed with bigness and with money, and currently witnessing a terrible real estate bust. A further connection was inaugurated today, with the opening of the Las Vegas CityCenter. The $8.5 billion development in the middle of the Vegas Strip is a joint venture of MGM Mirage and Dubai World. Development halted a few months ago when MGM appeared unable to fulfill its side of the deal. On the eve of the opening, Dubai World revealed that it was in far worse shape than MGM.
I have greater confidence in the future of CityCentre than in Dubai's most ambitious projects. The reason is simple: Vegas is about one thing, gambling, to which it adds top-quality hospitality, food and entertainment. There will always be plenty of gamblers, and they will want to visit Vegas for the forseeable future. In the case of Dubai, the fundamentals themselves appear suspect.
The city's development was prescient to begin with; realising he was sitting under paltry oil reserves, the Sheikh decided to build a port and dry dock, turning Dubai into a trade hub. He pushed retail, and that was fine as well, because of the demand from South and West Asia. An airline was set up, becoming one of the best in the world, and that too was sound policy, because the region needed a travel hub. A media city came next, catering to the boom in satellite television across the Arab world. So far, so great. It was the jump into becoming a lifestyle and tourism destination that was, in my view, a leap too far. Dubai is liberal by the standards of Gulf states, but it is still a pretty restrictive place. The idea that tourists would choose to go there rather than to more laid back resorts from the Adriatic to Koh Samui never made sense to me. As for building artificial islands and expecting a hundred thousand people to buy villas on them, why would so many want a million dollar home in a place where temperatures hit forty celsius for half the year?
I've seen pictures of the completed bits of the Palm Jumeirah and they look horrible. Rows of kistchy mansions cheek by jowl, with a view that spans a few meters of water before resting on another row of bunched up houses. The whole point of the sea is that it is expansive; a sea view only a few meters wide is hardly better than no sea view at all. 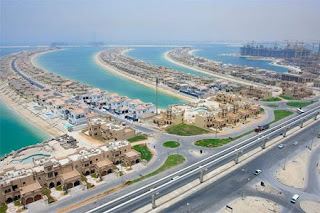 The people who bought first had one thing in mind: make a pile and get out quick. The properties were sold and resold while the market was hot. Now prices have plummeted, and supply will keep coming in if work continues on the two remaining Palms.
Since Dubai's government has washed its hands off Dubai World's debts, creditors are going to have a tough time recovering their dues, even after the inevitable string of extensions. My feeling is that in the medium term CityCentre will prove a better bet than the three Palms.
Posted by Girish Shahane Girish Shahane at 9:23 PM

I was in Dubai this year, and last and this year the sense of panic was greater, the restaurants were emptier, the cranes weren't moving, and the Russian prostitutes in the hotel lobbies looked even sadder.

The stories coming out of Dubai this year have been weird in a way that matches the city itself, no? Top end cars abandoned at the airport by foreigners fleeing debtors' prison and so on.
Johann Hari's piece written back in April still seems to me the best overall view: http://www.independent.co.uk/opinion/commentators/johann-hari/the-dark-side-of-dubai-1664368.html
But there are still plenty of people on TV saying 'the fundamental Dubai story is still strong'. I doubt it is, as do you. What I don't understand is why so many Brits bought into this Dubai Lifestyle idea. I guess they've already bought up the south of France...

Yes, Dubai always seemed a weird holiday destination choice to me. But sad to think of how many lives this is going to impact.

I don't understand how the Dubai government can wash their hands off the debt, surely they had a hand in the whole scheme?

They're saying Dubai World might be owned by the Dubai government, but is an independent company, and all loans to it were made on the basis of a business plan accepted by lenders rather than a guarantee of government backing.
Of course, the truth is the banks presumed the government would back it because it was owned and headed by government figures.
It's an interesting game being played now, because the guys with cash to save Dubai are the rulers of Abu Dhabi, but they will want to see the upstarts in Dubai squirm for a while, and leave no doubt about who the real big boss of the UAE is.