Is Avatar a Hindi movie? 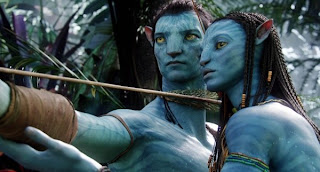 Well-written piece of one of the most hyped flicks of recent times. Though I wonder why you did not write anything about the choice of the movie's name - AVATAR (which has lots of connections with Indian mythology) - in your post.
And yes, James Cameron has had quite a fetish for cutting-edge technology ...right from the days of The Abyss.

PS: And it is not quite true that Indian techies are not great designers. Sabeer Bhatia, Ajay Bhatt(of the IBM ads)and others of their ilk did ply their trade, but unfortunately not in this country.

Sujoy, thanks for your note. Of course, the title ought to have been on top of the 'connections' list, stupid to omit it.
As far as Indian techies go, I'm aware of their incredible contributions in the US. I am not suggesting Indians are genetically incapable of becoming fine designers.

OK, I wasn't completely stupid. I put in this line, "Is Avatar the Hollywood incarnation of a Bollywood blockbuster", meant to draw attention to the original Indian meaning of Avatar.

As Venkatraman Ramakrishnan, this year's Nobel Prize for Chemistry winner said recently in an interview in Bombay that India will only produce Nobel winners (and you can read designers, inventors etc here) when India functions as a meritocracy. Till then, I guess, Indians will flourish in lands where meritocracy is the sole criteria for selection and excellence.

The difference between your standard Hindi film and Avatar of course is joy. Avatar contains no humour, no wit and is utterly joyless. You leave the cinema only with the feeling that you are now three hours closer to death and with significantly less money in your pocket.

Adrian, I liked Avatar much more than you did, but you're right about the humour bit; Cameron has never seen the lighter side of life, and when he tried, in True Lies, the results were pretty sorry.

avatar is not anti-AMERICAN. the folks mining Pandora are not the US government. it is a private company that uses ex-marines in the security department.
so.. er... anti-capitalism here? which is also there in full flow in hindi movies, especially those with bhisham sahni?

Wanderlust, I didn't use the word 'anti-American' in my piece. I spoke of American militarism. The major political points of reference for Avatar are: The creation of the American nation and the simultaneous suppression of natives; the Iraq war; and the battle between environmentalists and polluting industries.
In Indian movies from the 1950s in which romantic socialism was strong, the battle was of rich versus poor, and the rich might be industrialists, moneylenders or zamindars. The trend was very much of a piece with Nehru's vision.

I think the mammohan desai comment is to do with his style of constantly moving the story forward with one scene rapidly following the other leaving little time to ponder or think. Also the story needs the viewer to stretch imagination and temporarily suspend reality. Everything happens at a break neck speed in the movie but nothing untoward happens to the hero, except of course to the hero’s mentor (or some similar figure) – who needs to die. The premise or dil can be anything… but the basic ‘style’ remains something that mammohan desai was famously known in India for.

Jaimit, interesting that you think Cameron's style is break-neck, I've called it old-fashioned. He works out plot details much better than Manmohan Desai, but as Adrian has pointed out, Desai's films are MUCH more fun and filled with joie de vivre than Avatar.
As I mentioned in a column once, more stuff happens BEFORE the opening credits in Amar, Akbar, Anthony than transpires in any ENTIRE Hindi film these days.
If I had to choose a Hollywood movie that comes close to the Manmohan Desai spirit I'd probably go with Indiana Jones.

Of course, you did mention that :)
And considering Adrian's comments about the joy part, could not agree more. I mean, how can you ever come out of the hall after watching a David Dhawan or Rohit Shetty movie without experiencing the unbridled joy of having your brain all messed up. It is a pity that guys like Anurag Kashyap and Sriram Raghavan are trying hard to deprive us of that.

Lol. Have to say, there are hilarious moments in Dev D, Gulaal, Oye Lucky and other new wave films, so they haven't given the craziness up entirely, which is great.

Its a English movie but theme is taken from Ramayana.

Of course, Dev D and Gulaal have already been spoken for.

About OLLO, it's funny/crazy all the way. So much so that if you didn't know better you'd think it's a comedy.

BTW, Girish, are you going to be there at the Jaipur Lit Festival? If yes, could you mention when exactly? I would really like to meet you.

Sorry, Nimit, no plans to attend. D'you live in Delhi? I come there once in a while, maybe we can get in touch when I'm there next, or when you visit Bombay.

I agree Avatar is as simple a story line as possible in cinema. And Titanic, True Lies were both simplified as well. But Terminator? I feel the Terminator series has a lot of depth, both morally and plot wise. Time travel, artificial intelligence....

Mohammed, the first Terminator does have a reasonable plot, though I don't think it is too complex. That movie had a very complicated production journey, with all kinds of people involved and about a dozen writers. Cameron had more control on Terminator 2, and that had a very basic story, it is essentially one long chase.