Of the hundreds of images produced in the days after the Bhopal gas leak, two stand out in the public memory. Strangely, both document the same scene: the burial of a girl who died from inhaling the gas, her eyes turned glassy blue, the smallness of her face accentuated by a man's hand bestowing a final loving caress. Raghu Rai's black and white photograph was taken from a high angle at one end of the makeshift grave. 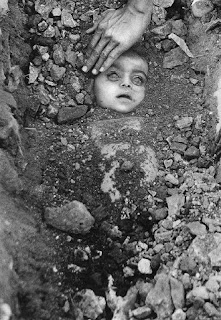 At almost the same instant, Pablo Bartholomew, crouching close to the child's head to one side of the burial spot, clicked a colour frame which went on to win the World Press Photo of the Year award. 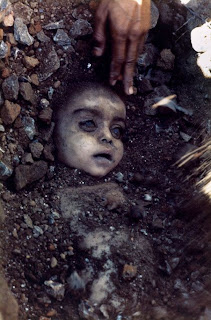 The pictures demonstrate the different perspectives of their creators: Rai, a lover of classical compositions, drew out the pathos of the event, while the edgier Bartholomew highlighted its horror. The two photographs are often confused, not just because they are similar, but because, I believe, the intimacy of the scene creates the impression of a solitary communion between father and daughter, a moment which the photographer witnessed and memorialised without intruding in any way. One lensman might achieve such a non-instrusive presence, it is difficult to imagine two doing so.
Other pictures taken by the dozens of cameramen at the spot attest to the frenzy in places where burials or cremations were taking place. If somebody had filmed a long shot of the yard while the girl was being buried, we'd have seen, not just a father and two lensmen at an infant's graveside, but a dozen other burials not far away.
None of this indicates that the intimacy evident in Rai's shot, and to a lesser extent in Bartholomew's, is fake. Rai, describing the genesis of the shot, said he followed vehicles taking the dead for final rites, and came upon the spot where, after burying his child, a man brushed away the dirt on her face, uncovering it for a final look. Both photographers, in this account, wept afterwards.
But what if it had been otherwise? What if the man doing the burying was a stranger to the child whose body, like those of hundreds of victims, had languished unclaimed, possibly because her entire family had perished? Nobody has come forward in the twenty-five years since the disaster to provide a name and a narrative to go with the image. What if the two photographers, recognising the potential of a dramatic shot, asked the man to repeat his gesture till they found the ideal frame? That kind of thing happens regularly.
At what point would the artificiality of the process of creation begin to impede the meaning of these photographs, which derive their significance from being representations of fact? At one extreme we have the photographer as the equivalent of a fly on the wall, in no way interfering with an unfolding event. At the other end we have an entirely staged act being passed off as something real.
The most famous photograph taken by the legendary photojournalist Robert Capa, showing a loyalist soldier in the Spanish civil war falling to the ground after being hit by a bullet, seems to capture a fleeting moment without intervention. 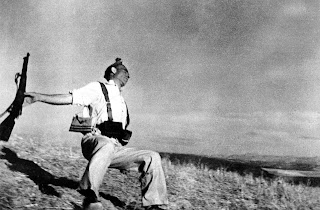 In recent years, critical consensus has moved toward the idea that Capa staged the entire scene. If this were proven true beyond doubt, one of the most famous journalistic photographs of all time would be sapped of most of its import.
That would not be the case with the Rai - Bartholomew's pictures because the two certainly did not stage the gas leak, nor the child's death. The hand in the frame, while adding an important sense of proportion and, in the case of Rai, emotion, is nevertheless not central to the image. That role belongs to the startling face of the child, which death transformed into something like a ghastly doll, and which became representative of the thousands of painful, unnecessary deaths in Bhopal twenty-five years ago.
While the meaning of their images is secure, I find it peculiar that the two brilliant photographers have not spoken at greater length about their most recognisable (and, paradoxically, most misattributed) creations. It now appears we will never know the story of the infant, but we might yet understand more fully how she came to be the emblem of a terrible tragedy.
Posted by Girish Shahane Girish Shahane at 11:43 AM

An excellent write up. The fact that leaves me ashamed is this trajedy was a domestic ones and the victims still haven't been compensated.

This was in Africa when a journalist took the picture of a Vulture sitting next to a baby starved in the famine. THe journalist committed suicide the week after. Do you know that is ?...Srikanth

Thanks, Srikanth. I think you are thinking of Kevin Carter; he committed suicide a few months after visiting the Sudan and taking pictures including the one you erefr to of the vulture: http://www.npr.org/templates/story/story.php?storyId=5241442
A photographer who was on the plane with Carter gave a very different account of the way the picture came to be taken. That's why it would be really interesting to get Rai and Bartholomew together to discuss their respective images of the infant.

Funny. It had been an enduring mystery to me - how the same photograph was attributed to both. Each time, I would see Bartholomew, I would tell myself I was mistaken to think it was Rai, and vice versa.

My Nani has helped out with the funerals and burials - she lives in Bhopal, and we were there too at that time. I remember she coming back crying but was too small to understand what had happened, of course.

I was one of those who always confused between these two haunting photographs until a couple of years ago when some magazine(Outlook?) ran a feature on Raghu Rai.
Your comments on two pictures are undoubtedly very illuminating. But the point where I would like to disagree is your surprise regarding the fact that none of the photographers have discussed it at any length. Considering the magnitude of the tragedy,the subject of the photograph and the emotional effect it had on both Rai and Bartholomew, it is quite natural that they have preferred to stay quiet regarding them.
In contrast to this, I remember National Geographic embarking on a campaign to identify the girl in the famous 'Afghan Girl' photograph. They could do that because unlike the Bhopal photographs, this iconic picture had none of the horror associated with it.

Its the brand that you have created for yourself. Mr. Raghu Rai followed the black and white photography as his identity and trademark....Thus,in my view it should be appreciated that how a photographer pictures his photograph.Very good insights and a knowledgeable post.