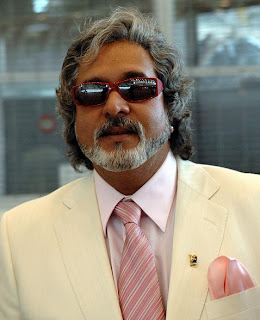 Vijay Mallya is on every TV station whining about aviation regulations and taxes, all of which existed in exactly the same form when he decided to launch the vanity project that is Kingfisher Airlines. At the time, he brushed aside concerns about profitability, boasted about providing lavish service at reasonable prices, and looked forward to flying Airbus A380s to distant countries. Then he gobbled up AirDeccan, briefly changed it to plain Deccan, then to Kingfisher Red. None of it worked. The firm's been bleeding money at a rate of 1 million dollars a day for the past 18 months. Now he's going to the Centre hat in hand. He wants the government to get involved in private airlines while most frequent fliers wait for the day when Air India is privatised.
Meanwhile, an airline called Indigo, set up by promoters who prefer stay in the background, an airline run efficiently with clean, new planes, punctual service and budget fares , has managed to turn a profit in the harshest of times.
Here's the funny thing. We have, in India, an industry that suffers dreadfully from over-regulation and over-taxation: liquor manufacturing. Prices are extortionately high at the shop in most states and, in Bombay, the VAT on any glass of beer, wine or spirits sold in a restaurant just went up to a ridiculous 25%. Yet, alcohol manufacturers make good money, and Mallya makes more of it than anybody else. Enough to fund an F1 team that is stuck perpetually at the back of the grid.
So, rather than coming up with absurd ideas like a day-long strike, or asking for a state bailout, he ought to reflect on his own ill-advised business plan and, if he can't find a way to rectify matters, declare the airline bankrupt. It's been done before, you know. Remember Modiluft, Damania, East West?
Posted by Girish Shahane Girish Shahane at 10:41 PM

Yes, but he can hardly declare bankruptcy when he has "personally handpicked" his airhostesses....makes Kingfisher that much more special....and deny us all the sniggers this announcement makes at the start of every flight!! Such a cry baby, hope the government stays tough.

i am against Govt bailout of pvt airlines, at the same time, it is unfair to collect taxes from the industry and transferring(bailout or capital) to one (govt) airline which has no intention to make profits

As of today, the strikes been called off but i wonder how much of the threat was because AI is getting 20k crores for a poorer business plan than KF.

The pvt airlines have a point when they talk about usorious taxes but every segment of indian industry apart from the mollycoddled IT sector, fights the same battle.
My own cynical mind says VM and co. expected a change of govt and one which could be 'handled' by them.
S Anand