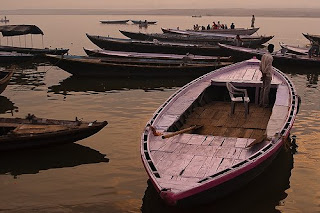 The state government has taken a step toward introducing public transport on the Neral-Matheran road by buying mini-buses for the purpose. Whether it can actually break the stranglehold of private operators is another matter. For those who haven't heard of Matheran, it is a popular hill station not far from Bombay. The closest railhead is a small town called Neral at the foot of the mountain. The only public transport between Neral and Matheran is a narrow gauge train which traverses a picturesque route but takes forever doing so. Those who want to get to their hotel rooms fast have only one option: private taxis.
The taxis wait till they've got enough custom before starting. Though they're officially full once four people have bought tickets, they frequently hustle for two or three more clients, stuffing these unfortunates in the back seat of the Omni. If you land at Neral at 2pm on a weekday in lean season, you might have to wait an hour before the driver deigns to finish his chai and ferry you up the winding path.
The worst thing about the private taxi cartel in Neral is that it deprives locals of reasonable commutes. Most tourists can afford fifty rupees per head for the fifteen minute ride, but Neral citizens who work in shops and hotels in Matheran don't earn enough to be able to afford even cut-price back-of-the-van seats. They climb the hill each morning on foot, and climb down after their shift is done, spending something like three hours in the to and fro. During fierce downpours common in this season, the trek becomes a nightmare for daily wage earners, though it's a delight for weekenders wanting to hike the slippery trails and get drenched under waterfalls.
The labourers of Matheran have long demanded a regular bus service between the railhead and
hill station. It's a testament to the venality of politicians and civil servants that a few taxi drivers have for decades managed to stall this legitimate demand.
While on the subject of oligarchies, let me mention two more tourist spots in need of augmented transport:
The dozens of ferries between the Gateway of India and Elephanta Island are controlled by two people. The ferries take forever to get to the island, and there's definitely room for a quicker service, but of course it's not going to happen.
No trip to Varanasi is complete without a dawn ride along the ghats in a rowboat. The boats seem to be the same ones that were playing the waters when the Buddha stopped by some 2500 years ago. I guess their creaky charm is part of the rustic appeal of the place for foreign tourists, but surely there's room for more comfortable vessels alongside these antiques. I put this to our boatman, who revealed that Varanasi's boats are owned by members of a cartel who allow no new entrants and see no need for innovation. Those who do the rowing receive only a fraction of the stiff fee paid by travelers. The rest goes to owners, who use bribes, threats and violence to stave off competition in the lucrative market.
This morning's article about Neral-Matheran buses is here.
Posted by Girish Shahane Girish Shahane at 8:17 AM

When I went to Varanasi I was able to hire a rowboat (sans boatman) for myself (and my missus) and row about all day long (although my noon it had gotten too hot). You're right about creaky though, you really do need two people - one to row and one to bail.

So your time at Oxford was of some use, then :)
You were among those who woke at 6am on winter mornings to row, right?

That was not by my bag. The closest I got to the river at Oxford was the odd leisurely drunken punt from the LMH boathouse.