Egon Schiele and the Flu 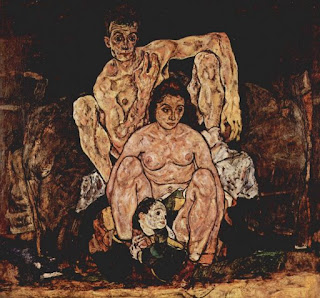 Vienna is the Aishwarya Rai of cities, extraordinarily beautiful but cold and rather boring. It is redeemed somewhat by the paintings of Gustav Klimt and Egon Schiele. The latter's been on my mind because my friend Chetna, who visited Vienna last week, came away a fan of the man; and Sotheby's recently organised a lecture about the nude in modern art in which the Austrian artist's drawings and paintings featured prominently.
Jabeen and I had expected to be impressed by Klimt on our Vienna visit, but Schiele came as a surprise. That's because Klimt is among artists whose works communicate well through photographs. Schiele's paintings do not, which is why I had not been overly impressed by them before walking through the Leopold and Belvedere museums. You might look at the image above and like it, but will get little sense of how moving the original is.
Part of the reason it touches us is biographical. The infant in the frame replaced a bunch of flowers in the original composition after Schiele learned that his wife Edith was expecting. She died in her sixth month of pregnancy, and he three days later, aged 28. Both succumbed to the influenza pandemic of 1918.
The outbreak of the so-called Spanish flu at the end of the first world war claimed more lives than the war itself had done: fifty million in all. About a third of the world's population is thought to have caught the infection. The country which lost more people than any other was India (then undivided). Between 15 and 17 million Indians died of the flu in those months, from a citizenry of 300 million. The equivalent in today's terms would be 50 million deaths, the entire population of all our major metropolises put together.
Despite the collosal damage it caused, the flu of 1918 and 1919 hardly figures in the nation's imagination. We hear about the plagues of the late 19th and early 20th century that, well, plagued Bombay and Poona, but influenza finds no place in our history books or folk tales. We read stories about cholera, small pox, leprosy and dozens of other ailments, but never ever about the worst wave of death ever to wash over the sub-continent.
I thought of these things as I travelled back from town this evening, passing people wearing masks, handkerchiefs, scarves, anything to keep out the H1N1 germ. The Spanish flu, too, was an H1N1 strain, but far more lethal. What if something that infectious and dangerous were to return? Our response to swine flu has proved that our defenses are too paltry to withstand an assault like that. We would be able to keep the death count down below 20 million, but considering the kind of panic a dozen deaths have caused, it is clear the entire nation would go berserk with fear. Something that doesn't appear to have happened eighty years ago.
Posted by Girish Shahane Girish Shahane at 5:35 PM

The coincidence struck me too, when I found out how Shiele and Klimt died. (That I should see their works at a time when a pandemic flu is making the rounds.) How democratic diseases can be sometimes, right? Even the rich can't escape some of them.

probably its just a babble-- but there's Amartya sen's theory that says something to the effect that massive famine doesn't happen in a democracy. probably democracy might help prevent a similar level pandemic? my guess is that the same forces would be at play

An entire nation would go beserk with fear cos we have a media that goes beserk. That wasn't there 80 years ago.

Didn't get to the Belvedere but the Leopold was a revelation as far as Schiele was concerned for me as well.

Next time hit the cafes .. thats where the interesting Vienna is. Aishwarya on caffiene. :)

DS, Aishwarya would have to be on coke to loosen up, and I suspect the same is true of Vienna. As far as the flu goes, our state government has hardly helped matters, has it? Closing schools is one thing, because children are especially vulnerable to this variant of H1N1, but why multiplexes? I mean, if you close those, why are offices open? Why are trains and buses running? What's the logic being applied here? I'm particularly upset because we were planning to see Kaminey on Saturday...

Jaimit, interesting parallel between famine and disease. It has to be said, though, that many of the countries that suffered from epidemics in the past were democracies. Like in 1918 England was a democracy, but suffered horribly during the influenza outbreak anyway.

However Miss Rai does have a bitchy streak that I find interesting. Here's some evidence.

It's ridiculous even closing schools. But what is puzzling me is the number of deaths from what is really a mild flu. This is no SARS. Also why there were so many deaths in Mexico then so few in the US and UK where the spread has been fairly substantial? More than a democracy is it to do with the hygiene and poor prompt medical attention and epidemiological depts that ain't as good as that of the developed countries? Have most have the deaths that have occurred have been concurrent with an underlying illness that the victims had and so were immuno or multi system compromised already?

Thank God the Turks left coffee and not coke outside the walls of Vienna when they retreated. AR can stay in cold storage. :)

off tangent... but if you do write a longer piece on swine flu , maybe you'd compare the quality of sushma swaraj at health minister when sars was discovered vis a vis G.N.Azad.
I may not think much of Ms Swaraj's politics but she was a darned good health minister and every single tv appearance during that time was effective and assuring. GNA looks like he'd rather be elsewhere. More importantly, she cracked down on the system hard enough and quick enough to prevent any tragedies. S ANAND

Well, we didn't really get hit by bird flu, did we? Maybe it was because of proactive measures by Sushma Swaraj, I haven't looked into it.
But I disagree that she was a good health minister. In tackling the AIDS crisis, she brought along her prejudices against condoms, prevented good outreach programmes, policies which resulted in perhaps thousands of unnecessary deaths.
Unlike H1N1, though, we keep our AIDS deaths hidden well under wraps. I once wrote of the epidemic: A million Indians have died of AIDS, but not a single Indian has died of AIDS.

We're a hysterical people in general, so this reaction is hardly surprising. Of course it doesn't help when you have newspapers that milk the issue for stories hinged on angles that are far from newsworthy (eg. Are people visiting malls?) thereby generating more panic. And of course we have a health system that was unprepared. But why do folks have to rush to testing centres when they have mild colds? As a colleague said, people probably entered the centres negative and left positive.

Vienna was Aishwarya-like except for that higgledy piggledy house/museum designed by the architect who doesn't believe that floors need to be flat... Do you remember? We took my picture beside a sign that said "Toilet of modern art."

Why is my memory so bad, what's the name?

The name is Friedensreich Hundertwasser, I don't blame you for forgetting it :) The building was Hundertwasserhaus, and yes, it was seriously cool.