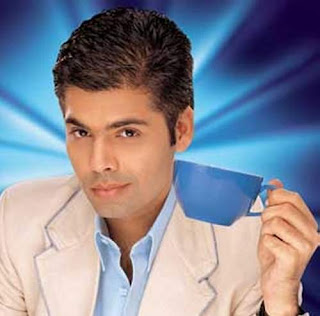 Karan Johar has reported that Shahrukh Khan was 'shattered' by his experience of being kept in a room for an hour and questioned by security at Newark airport. Khan doesn't feel like ever stepping on US soil again, and his best pal Johar is bound to empathise.
This creates a problem. Johar likes to locate his films outside India: New York City (Kal Ho Naa Ho), London (Kabhi Khushi Kabhie Gham) and Miami (Dostana) have featured in past productions. After a few Indians were mugged in Oz, Johar protested by moving to the US a film shoot planned for Down Under. Now that Americans have proven themselves racists and Islamophobes with their vile treatment of Shahrukh, which was but a step removed from the gas chamber, Johar might want to take his trade elsewhere.
A return to England is a good idea. Of course, the speech and manners of that country are laughable, entirely deserving of the mockery (starting at 1.09 in the clip) dished out in Kabhi Khushi Kabhie Gham. Luckily the Brits have been taught some Indian culture and made to sing our national anthem. It was different in the US. The Chinese restaurant owners in Kal Ho Naa Ho, for instance, didn't understand that the gratuitous insults they faced from the Indians across the street were only fair given that Chinese people look and talk so funny.
Posted by Girish Shahane Girish Shahane at 9:13 PM

Can I nominate you for some sort of "sarcastic blog of the week" prize?

BTW that is one creepy photograph. Do his PR people hate him?

That's just your racism showing through, Andrew. He's looking debonair, but you just interpret it as smarmy.

Maybe you're right, I will try hard to hold a tea cup just that way next time I'm drinking tea.

I assume he's married with children of course. Any girl would be lucky to have him.

I give him credit for not having married, though he's only half out of the closet.

Not married eh? I'm surprised. In any case I certainly hope that he wasn't put off America forever, I can think of no finer place to spend Indian Independence Day than Chicago.

Oh my goodness, that was totally obnoxious!Am I glad I did not see that film.

WHERE did you find that picture!!!
Let me guess.. Koffee with Karan...and debonair? Hahaha...trying to match Miss Rendezvous Simi in the smarmy stakes!
I think Salman Khan had the last laugh in this whole episode. But wonder what he will do if the random Khan check will pull him out for a check on his next US visit. we'll definitely see more action don't you think?:)

i instantly typed this in the browser define:kitsch