Two bits of news caught my attention today. This morning I read about a guy in New Jersey calling the police after spotting "an eccentric looking old man" wandering about the yard of his home, which had a For Sale sign on it. An officer named Kristie Buble answered the call and caught up with the disheveled man a block away. He was walking around in pouring rain. She asked him who he was, and he replied, "Bob Dylan". She asked him what he was doing, he said he was looking at a house for sale. And what was he doing in town? He was on tour with Willie Nelson and John Mellencamp. He had no ID, was wearing black sweatpants and two raincoats.
Concluding the man was "acting suspicious", Buble decided to drive him back to the hotel where he said he was staying. He was very co-operative; "He said he understood why I had to verify his identity and why I couldn't let him go," Buble said. "He asked me if I could drive him back to the neighborhood when I verified who he was, which made me even more suspicious".
She was met by her sergeant at the parking lot of the hotel, and told him, "Sarge, this man claims he's Bob Dylan". The man peered into the car and shook his head, "That's not Bob Dylan".
Needless to say, it was Bob Dylan. The officers were left feeling sheepish after the identity of the living legend was verified by staff. There is no indication if Dylan got a ride back to the place from where he was picked up. 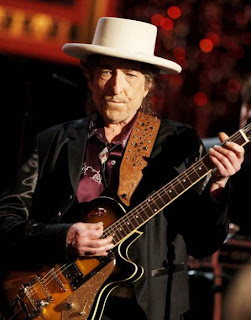 A few hours later came news of Shahrukh Khan being held up at Newark for two hours. "I was really hassled at the American airport because of my name being Khan...It was absolutely uncalled for...I felt angry and humiliated," said the actor, who was heading to Chicago to participate in an Independence Day celebration. Coincidentally, Shahrukh has a film coming up titled My Name Is Khan, in which his character is harassed by US authorities and feels angry and humiliated.
You can't buy such publicity.
Posted by Girish Shahane Girish Shahane at 7:17 PM

Its all part of our VIP culture mentality isnt it?
if we say "turn the tv off " to all those offended by sach ka samna we should also tell those
who rail against the US authorities that they neednt go to that country.
And ambika soni ! doesnt she realise shes a cabinet ministed of the union of india not part of the SRK industry ! S ANAND

I would have thought that the comparison with the Gates-Crowley affair would have been more apt.

Look, I'm a pale-skinned White Anglo Saxon Protestant and EVERY time I travel by myself (ie without wife and kids) I get hassled by security in the US, especially if I'm on a single ticket. Why do I have no luggage? Why am I only flying on a single ticket? Why am I reading a book about the Middle East? Have I ever taken flying lessons? (Er, yes, I got them once for my birthday (the wrong answer)).

People outside the US have no idea how profoundly Sept 11 damaged the American psyche - it was much bigger than Pearl Harbor and the US is still in recovery. On that day 19 people trained in Afghanistan set out to strike a body blow at America and were completely successful. America is still reeling. Now Mr Khan's paternal grandfather is from Afghanistan which might set off an alarm bell or two and his maternal grandfather fought with the Japanese. He was detained for two hours? Big deal. I hope he didnt tell them about all the times he's killed people in the movies.

im surprsised he didnt resort to his typically on-screen simian impersonation to placate the immigration officers. a couple of vacuous grins and a little jid would have done the trick.

Not to mention a flutter of the eyelashes :)