Volkswagen has monopolised the advertising in this morning's Times of India, including the entire front page and back page. The back shows an impressive looking factory, supposedly the mammoth plant built at Chakan, near Bombay. 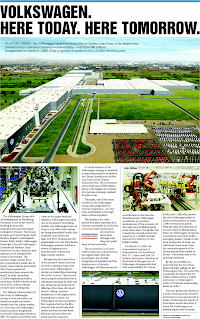 A line at bottom right reads, "Images for representational purposes only. Terms and Conditions apply." What is one to make of that? Is the image a composite? It looks real enough, especially all those people walking along the road although a sidewalk is available. Strange.
Elsewhere, Volkswagen is decidedly economical with the truth. 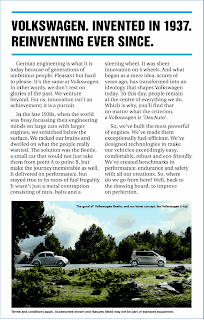 In this ad, the text states: "In the late 1930s, when the world was busy focussing their engineering minds (sic) on large cars with large engines, we scratched below the surface. We racked our brains and dwelled on what the people really wanted. The solution was the Beetle, a small car that would not just take them from point A to point B, but make the journey memorable as well."
Memo to copy writers: when selling German products, DO NOT mention the late 1930s. Because, like, some might respond to this ad by saying, "Wait a minute, was the Beetle the result of a car manufacturer considering what people really wanted? I remember reading that Adolf Hitler ordered Ferdinand Porsche to produce a small, inexpensive car. It could be built only because of subsidies provided by the state. And wait a minute, there was something about the design being stolen from a Czech model, for which Volkswagen later had to pay substantial damages."
Posted by Girish Shahane Girish Shahane at 9:20 AM

Incidentally, a Golf ad usually introduces many advertising books.. "Hey Whipple, Squeeze This" my first book on advertising, was full of it.. If you have money, you could sponsor the entire newspaper and even the supplement.. :)

it is such a crass attempt at wannabeism. the creative brief seems to be - "people in india do not know us and we are not seen as a serious player. take our brochure and print it in the TOI" So much copy in so many ads on one day... what a bore. It seems to be a top management pleasing ad done with no client research or understanding.
have I been too harsh - forgive me.

And my favorite when it comes that composite image is the neatly art directed parking lot. All the red cars on one, and the white on the other.

VnP, those might be cars off the production line, no?

@Girish,
I'd thought about that, but it still looked funny. But go ahead, pick the nits.
Actually I was kinda looking forward to the ads when I saw the Volkswagen logo on the front page. But, the communication doesn't even justify the Volkwagen font, let alone the brand.

you should ask blue star. someone mentioned they'd won the contract for the factory so if they've commissioned their part of it, it may be a genuine pic. swati

I think VW shoudl position their cars as a premium offering. For starters they should increase the prices of the existing Jetta and Passat to be in line with the Merc 500 series and the BMW 7 series. To give the buyer an upwardly feeling, they should specify that the car has to be bought with a company-approved driver, petrol pump and parking area (charges payable by user), failing which they should heavily fine the user and take away the car. They should also restrict one car sold per pin code in the country and make sure that cars are not run for more than 1000 KM in a year. All this will go towards preserving the exclusivity of VW cars and set them apart from the likes of Maruti and Tata (it will also set them in the leagues of Studebaker, Packard, Ford Edsel, etc ;o)