The Indian Express Shoots Its Mouth Off

There's no distinction at all between news and editorials these days. The Reserve Bank cut interest rates last evening, and it made the top of the front page in this morning's Indian Express. The headline read, 'Alarm Bells Wake Up RBI, Rates Cut'. The implication being that the central bank was asleep all this time. The first sentence of the article expanded on the same idea: "It took a dramatic slide in growth to 5.3 per cent, inflation to 3.3 per cent, four consecutive months of deceleration in exports, a 2 per cent contraction in industrial output and finally a serious drop in non-food credit growth rate for the Reserve Bank of India to cut key policy rates — the repo and the reverse repo — by 50 points."
The chart published by the Express on its business page paints a rather different picture, and a more accurate one. It shows that the Reserve Bank has cut the Repo rate, the rate at which it lends to banks, five times in the past four months. On three of these occasions the cut was a full percentage point. 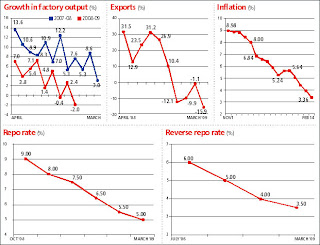 Maybe the 'economic bureau' of the Express, the chaps credited with the report, won't be satisfied until the nation's top central bankers emerge from their offices with sacks of money and throw about fistfuls of currency notes, shouting, "here, grab this, it's free".
Posted by Girish Shahane Girish Shahane at 10:13 PM

As long as I'm strategically positioned to get a sackful of those notes, I have no complaints. =P