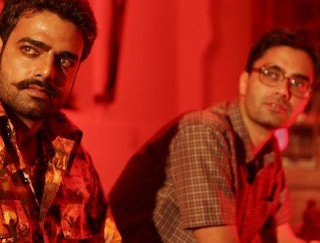 In writing about a huge Jitish Kallat canvas a few weeks ago, I suggested artists ought to be careful while quoting classic works, lest their own creations pale in comparison. That's precisely what happens in Anurag Kashyap's Gulaal, where we are treated to a painful rehash of Yeh duniya agar mil bhi jaaye, Sahir Ludhianvi's lament from Guru Dutt's Pyaasa, originally set to music by S.D. Burman and sung by Mohammad Rafi.
A more important failing of Gulaal, which it shares with many indie films, is that its supporting cast is far more interesting than the central character. In mainstream movies, the habit is to sacrifice everything at the altar of the main star's role. He gets the best lines, the best punches, the best tunes, the best love scenes. There is little or no detailing of smaller parts, and character actors are rarely provided roles with scene stealing potential. Indie films have reversed this tendency, Luck By Chance being a recent example.
The most compelling figure in Gulaal (spoilers ahead) is Rananjay Singh (Abhimanyu Singh), scion of Rajput royalty who has rejected that legacy for his own brand of freedom. He's always ready for a fight, or a laugh, or a large peg of whisky. Rananjay becomes mentor to the timid, studious Dilip Kumar Singh (Raj Singh Chaudhary), who discovers in his new law school a terrifying den of hazing and intimidation.
Rananjay Singh, however, is abruptly killed off midway through Gulaal, and the film's energy sags thereafter, lifting every so often in scenes involving Kay Kay Menon, Mahi Gill and Deepak Dobriyal, but never in a sustained manner. The trajectory is a bit like that of the Sensex in 2008. We come to the film from the high of Dev D, and though the trend line starts dropping off fairly soon, there are many flashes of hope providing short-lived rallies. After Rananjay dies, we begin to despair of reaching new highs, but nothing prepares us for the horrible collapse toward the end. The last half hour of the film isn't quite as dreadful as this analogy makes it sound, but it's pretty close.
For a more complimentary comparison, I'd point to Romeo and Juliet. The most attractive character in it is Mercutio, Romeo's reckless, free-spirited companion. Mercutio dies in the third act and, all too often, productions of the Shakespeare play never recover from his death.
Something similar happened in Vishal Bharadwaj's Macbeth adaptation Maqbool after the death of Pankaj Kapoor.
I bring up Shakespeare because Gulaal has pretensions to epic scope in its story of royal lineage, of illegitimate children determined to wrest their inheritance by hook or by crook, and of historical wrongs sought to be corrected by armed insurrection. This part of the narrative, never convincing in itself, is married with a story about student politics, elections for general secretary, and the organising of the annual festival. Two very different themes unsucessfully yoked together. The result is a film that is all of three hours long but feels like a fragment of a much longer tale. I'm not going to rush out to buy the director's cut.
Though Gulaal is something of a train wreck, its language, songs (aside from the Ludhianvi 'tribute'), characters, and visual style (patchy because of the long gaps between schedules, but hinting at something more coherent), convey a nation very different from the one we are served up in the multiplexes week after week, a nation that is crying out for representation and creative interpretation. It is a nation Anurag Kashyap and Vishal Bharadwaj understand intimately. They have crafted accomplished movies in Omkara and Dev D, and, with the access to resources that they now have, it may not be long before one of them directs the first truly world-class Hindi film in a generation.
Posted by Girish Shahane Girish Shahane at 11:19 PM

I think Gulaal is an okay film. It does show the skills of Anurag Kashyap the writer but its still a very conventional Hindi film from the cinematic point of view.

Hi. I think Dev D IS truly Hindi cinema I'd be proud to watch anywhere in the world and not cringe.

So,coming from that high the flaws in Gulaal were too many starting with the mix of college politics with real life ones that seemed stretched too much or is this what happens today? ...then I am quite out of it.In concurrence with you that the supporting cast steals the show, Ransa with his cocky swagger, Kiran with her ruthless calculations and Prithvi Bana as the sage in wild costume were excellent. Still, a better than average film and am a firm fan of Kashyap as of Bhardwaj, and I thnk Maqbool held out till the end well.

Waiting to see Kaminay now.And any Abhay Deol film that comes up next.:)