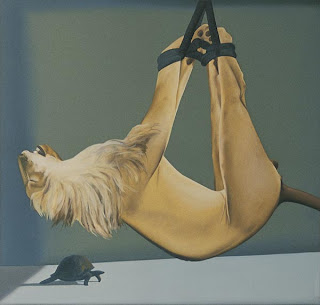 The art market is getting ugly. Saffronart's spring sale, which concluded two days ago, provided proof, if any was needed. Substantial works by M F Husain, S.H. Raza, F.N. Souza, Ram Kumar, Ganesh Pyne, Akbar Padamsee and Prabhakar Barwe among the moderns, and Atul Dodiya, Anju Dodiya, G R Iranna, Shibu Natesan (canvas pictured above) and Justin Ponmany among the contemporaries, failed to find bidders. It was a particularly disastrous auction for Raza, three of whose works were on offer, with high estimates of 20, 35 and 90 lakh rupees respectively. There was no interest anywhere close to those price points, and all three paintings had to be brought in.
Saffronart's December 2008 sale, the first major auction in India after the crash of September-October 2008, was seen as a test for the market. Though that sale didn't do spectacularly, failing to reach the low estimate in total value, there was something like a sigh of relief at the end. The predominant sentiment was it could have been much worse. Well, it is much worse now.
Consider these figures: In September 2006, Saffronart sold paintings and sculptures worth 15,964,190 dollars, or 68,64,60,170 rupees, with a high estimate for the sale pegged at 13,194,578 dollars, and a low estimate at 10,548,317 dollars. That was the biggest figure for a single sale it ever achieved. The market kept growing after that point, but the Bombay based auction house faced strong competition from Christie's and Sotheby's. In June 2008, when signs of a slowdown were visible, Saffronart garnered 9,721,241 dollars, or 38,88,49,620 rupees from its quarterly auction, still comfortably beating the low estimate of 6,759,000 dollars and high estimate of 8,343,125 dollars Three months later, just before the meltdown, the total value came down to 7,155,607 dollars, or 28,62,24,293 rupees, above the low estimate of 4,158,500 and high estimate of 5,298,000 dollars (these figures are not strictly comparable, because the auctions had a varying focus, sometimes concentrating on the moderns, at other times on a younger group of artists, but that's irrelevant to the main thrust of this post).
The figure for the just completed March 2009 sale? A total winning value, inclusive of buyer's premium, of 1,577,375 dollars, 7,88,68,725 rupees. In dollar terms, that's more than 90% below the gross of the September 2006 sale; the rupee total looks a little better, just a little, because the dollar is currently trading at historically high levels against the Indian currency.
On the positive side, 69% of lots sold in the March sale, up from 63% three months previously, and not precipitously lower than the 80% achieved in September 2008 just before Lehman Brothers went under. That 69% figure shows Saffronart is realistic about what collectors are willing to pay at the moment, and has modified its estimates and reserve prices accordingly.
The conventional thing to say at this point is that buyers are becoming more selective. I've never believed that sort of thing happens. Yes, a canvas by the late abstractionist V.S. Gaitonde beat its $100,000 high estimate by 30%, and an early Jitish Kallat climbed to its low estimate of 20 lakh rupees (these sale prices include the buyer's premium). But among the few high value lots that convincingly surpassed estimates were a B. Prabha and a Vaikuntam, proving that bad taste knows no recessions.
Posted by Girish Shahane Girish Shahane at 9:57 PM