In January 2006, I travelled to Pakistan to watch the first match of a series between India and Pakistan. The cricket was just an excuse; for years I'd wanted to visit Lahore and the easing of visa restrictions during the test series gave me access to the city. I went first to Delhi to get the visa. In the morning, a crowd of us collected up at the Pakistan embassy in Chanakyapuri to hand in our documents. We were asked to return at 4pm to collect the stamped passports, which was cutting it fine, because my flight left at around 6.30. Till 4.30 that afternoon, there was no sign of any passports being given back. Then a small window opened in a giant door, and names began to be called out. By 5pm, I was sure I was going to miss my flight. I called Indian Airlines who told me there would be no problem. I learned later that the flight operated a bit like those buses which wait until they're full before leaving. My name was called at 5.15, and I got to the check-in counter at the airport 15 minutes before the scheduled departure for Lahore. As I'd been assured, it was no problem.
An acquaintance of mine, Quddus, had recommended a hotel near Lahore's museum and university, but I hadn't got written confirmation of my reservation because every Pakistani worker had taken the previous week off for Bakri Id. I'd had a telephone conversation with the manager, though, and that gave me confidence to head to the hotel, driven in a Ford taxi that was no more expensive than ones available outside Bombay airport, but offered a much smoother ride.
I'm glad cricket was not top of my agenda, because the pitch was the flattest imaginable, as docile as anything offered up during the current tour by the Sri Lankans which has been cut short cruelly this morning. Pakistan's batsmen butchered the Indian attack, putting pressure on the Indian line-up, which opened with Rahul Dravid and Sehwag because, controversially, only one specialist had been played at the top to make room for Saurav Ganguly in the middle order. Sehwag responded in his typical style, with which Pakistanis have become painfully familiar. He scored the fastest double century ever, Dravid supported him with a steady hundred, and they fell just three short of the world record opening stand. By the time Sehwag was first out, the match was virtually finished, because mist and drizzle allowed little more than 200 overs to be bowled in the entire game.
On my first morning in Lahore, I visited the museum, after stopping at a traffic island to view the cannon Zamzama which features in Kipling's Kim. The museum houses, among many fine artefacts, a startling fasting Buddha from the Gandhara period. 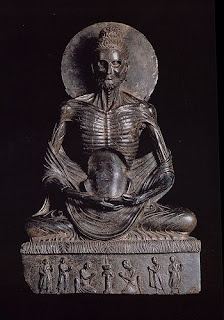 What photographs fail to capture is the impact made by the hollow sockets of the Buddha's eyes. In the story of Siddhartha, this represents a point before his enlightenment, when he fell in with yogis who believed in extreme austerities. He emerged with a comprehension of the Middle Path which rejects extremism of all kinds. Hmm.
At the museum's ticket counter, I paid the foreigners' rate, and was surprised by the surprised expression on the ticket seller's face. I had assumed everybody would realise I was an Indian as soon as I opened my mouth, but this was far from the case. Pakistanis simply are not geared to seeing Indians in their country, and so anybody who looks like I do is assumed to be a native. Also, there are great variations in the way Urdu is spoken, allowing my Anglicised Bambaiyya to pass with ease. For the rest of my trip, I quietly handed over the cheap local fee while entering monuments like the fort and Jehangir's tomb, saving a few hundred rupees. A pleasant change from being labelled a foreigner in many tourist sites in India because my shaved head, backpack, Lonely Planet and bottled water signal NRI.
That afternoon, I met Quddus for lunch at a restaurant on the Mall. I was surprised by the lack of beef on Lahore menus, and even more so by the absence of paneer. I knew paneer serves primarily as a meat substitute for vegetarian Punjabis, but wasn't prepared for its complete disappearance once the border had been crossed from one Punjab to another. For the rest, I didn't think the food was anything to blog extensively about. The stalls in Anarkali bazaar provided tasty fare, but nothing sublime, and the same was the case in top end restaurants. Two eating experiences stood out, the first being Cooco's Den at the edge of Lahore's red light district, known as Heera Mandi (Diamond Market). The Den is owned by a painter who grew up in the area because he was the son of a Heera Mandi prostitute. His paintings, many of which one sees on the way up to the terrace restaurant, are unexciting, glamourised portraits of local whores. The food, too, is standard Mughlai. What raises it above average is the excellent view of Badshahi mosque and an eccentric method of getting plates to tables. The kitchen is on the ground floor, and dishes are placed in baskets and hauled up by ropes.
On the third day of the test, I lunched at a restaurant near Gaddafi stadium, not far from where the shootout occurred this morning. The chef in charge, a man called Sajjad Mughal, initiated a long conversation after realising I was Indian. He was a Protestant, he said, and wanted to leave Pakistan. Were there good job opportunities for a chef in India? I suggested Canada or Europe were better destinations, if he could convince those countries to offer him asylum, which was very unlikely. He stuck with me through the meal, standing next to my table and asking me detailed questions about life in India.
That was a typical response even from Pakistanis who did not want to quit their homeland. Eyes would light up as soon as my nationality was revealed, and a flood of queries would follow. Almost all were friendly: the lone exception occurred in a dilapidated cybercafe where I was trying to finish a column before mosquitoes bites turned my skin into a mess of welts, while also answering the owner's questions about Sanjay Dutt and Shahrukh Khan. A loader who was sitting around waiting for his shift to begin, pushed a tabloid toward me and tapped meaningfully on its banner headline. "I can't read Urdu", I told him. "It says the Indian government wants to demolish every mosque in your country", he explained. "No, that's not the case", I said. He looked at me blankly, then went back to reading his tabloid. 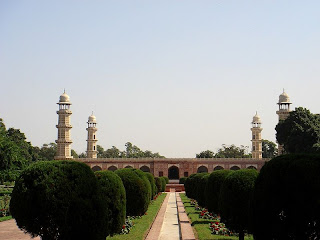 On the fourth day, I headed for monuments in the suburbs: Shahjahan's Shalimar Gardens and the tombs of Nur Jahan and Jehangir. I wanted to climb to the roof of Jehangir's mausoleum to look for signs of a pavilion that was supposedly dismantled and taken away during Ranjit Singh's reign. The upper floors were off limits, but I was so comfortable in the city by then that I fearlessly slipped a hundred rupee note to a guard to let me up the stairs. The only persons inside the complex, aside from guards, were four students mugging for an exam, who gladly interrupted their work to chat about India and Pakistan and ask for souvenir currency. Indians going to Pakistan would be well served by a wad of their own ten rupee notes and plenty of small change.
That evening I wandered into the Badshahi mosque, more or less a replica of Delhi's Jama Masjid, aside for the exchange of some delicacy for sturdiness. If the two structures look similar, the atmosphere within could hardly be more different. Lahore's biggest mosque is almost a picnic spot, a place where families gather when prayers are not being said. Women walk around the couryard in salwar kameezes, many not even bothering to cover their heads with a dupatta. Delhi's Jama Masjid, in contrast, is very female unfriendly. The one time I visited it with my wife Jabeen, I, the kafir, was allowed in, while she, the Muslim, was forbidden to enter.
It wasn't the Badshahi mosque that became my favourite living monument in Lahore, however. That had to be the gorgeously decorated Wazir Khan Mosque in the innards of the old city. There's nothing in that style in India, as far as I know. The mosque is right in the middle of a crowded, dirty, narrow-laned precinct, but cross the threshold and you're suddenly transported into perfect tranquility. The morning I visited, an old maulana was tutoring two young boys, sitting on a carpet, reading off a low wooden table. But for the electric heater about ten feet from the group, the scene could have been taking place three hundred years ago. 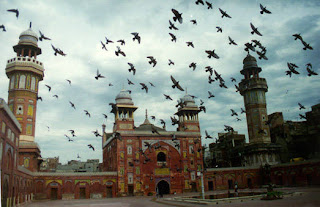 The evening before I was to leave, Quddus and an artist named Rashid took me out for dinner to a hip place where the waiters were dressed as cowboys. The servers attempted to be gruff, banging mugs on the table while serving drinks, but their forced impoliteness was somewhat at odds with the spiffy decor which included monitors embedded in the wall next to each table, playing music videos. The drinks, moreover, were not alcoholic, further distancing the restaurant from the wild west. Since liquor is more or less prohibited in eating houses in Pakistan, outside of luxury hotels, the serious partying happens in private homes. Rashid said I had to visit for Basant, when there was kite flying during the day and revelry in the evening. I had found Lahore an extremely convivial town, and said I'd be happy to return some year in February or early March. Unfortunately, the Punjab government banned kite flying soon after, ostensibly on safety grounds.
Before we drove to the cowboy eatery, we had visited the home of two artists, one of whom was moving to Delhi later that year. She asked if I'd take some of her books over, and I readily agreed since I had little luggage of my own. On my way to the airport, I stopped at Beaconhouse university, where she taught in the art school. It was a different world, full of boys and girls in tight T-shirts and jeans, the sort of clothes never seen on Lahore's streets.
At the airport I was surprised (OK, shocked) to find luggage inspections being directed by two white men. My carton of books was suspicious enough for one of them to handle it personally. As he swirled a high tech form of litmus paper around the box, he asked questions in a Brit accent. After answering, I asked what people like him were doing in charge of Pakistani airport security? "It's a collaboration between our two governments", he said pleasantly. "Collaboration? So are a few Pakistanis flying out to take charge of security at Heathrow, then?" His expression darkened. We have a wise guy here, I could see him think. But he said nothing, just pointed me to a counter where my carton could be resealed.
Posted by Girish Shahane Girish Shahane at 10:17 AM

After reading your experience about your trip to Pakistan it only pains to see how the Pakistani govt is not doing any thing abt the recent terror attack but only playing blame games...

That Buddha image is incredible! Do you know where I could get an image of sufficiently vivid resolution?

Not sure if there is one online; you'll just have to trawl through Google Images using search terms like 'fasting buddha' lahore.
The museum has a publication cataloguing its collection, and there are books on Gandhara sculpture which provide good res images.