For the moment, Bombay galleries continue to underwrite ambitious sculpture and sculptural installation. Three solos on view currently, at Chemould, Gallery Maskara and Sakshi respectively, fall in this category, all from artists who were born outside India's metropolitan centres. The best of them is L N Tallur's Placebo at Chemould. Tallur studied museology in Baroda, and his first show at Chemould back in 1999 reflected his learning. He constructed shelves with amusing displays inside, like one in which the top drawer contained what looked like fossil eggs, while the bottom one opened to reveal realistically moulded and painted fried eggs. After that, he dreamed up a number of mechanised pieces; one that was displayed for Chemould's 40th anniversary exhibition looked like clothes hanging on a line, but periodically filled with air and began to resemble intestines. Tallur's characteristic humour is visible in Placebo, but the work is weighed down by being too literal. 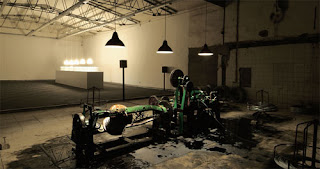 In Souvenir Maker, a massive barb wire fabricating machine occupies one half of a room while the other half is taken up by a long pedestal on which are placed glass tubes containing strands of gilded barb wire. The tubes are inscribed with the message: "Designed in America Conceptualized in India, Made in China, Sponsored by Korea .. ..Yes we are conditioned to think under flags...".
We are conditioned not only to "think under flags", but to think in symbols. It is a habit Indian artists should try harder to quit. My favourite work in Placebo was the least symbolic of the lot: a machine with spiral ducts in which toy animals circulated. The exterior was smothered by what looked like clotted resin.

Narendra Yadav's Pavlov's God at Gallery Maskara is his second solo exhibition. His first consisted of little quirky machines. This one has large quirky machines, reflecting, perhaps, the hubris of the era just ended. Unfortunately for Yadav, quirkiness works best on a small scale. One of the works currently on display, Paper Plane, has the object of the title crashing into a tall steel tower and cracking it open. The echo of the 9/11 attacks is impressive at first sight, but not a profound enough concept to keep one coming back. Even so, it is one of the two strongest pieces in Pavlov's God. The other, titled Celestial Bodies in Conversation, is a life-sized sidewalk of sleeping bodies lying under street lamps, while transistor sets play the music of the spheres, otherwise known as static.

Valay Shende's second solo at Sakshi is as unintentionally funny as his first. In the earlier exhibition he had, in complete seriousness, shown a work called Buddha Good, Marx Bad, in which a gilded Siddhartha makes a 'stop' gesture before a convertible embossed with names of well-known brands. The commies have been at the car hammer and sickle but failed to make much of a dent with their red weapons.

In this show, he pays homage to the lunch box deliverers of Bombay. Since the dabbawalas are renowned for their punctuality, Shende has decided to make their faceless figures out of watches. 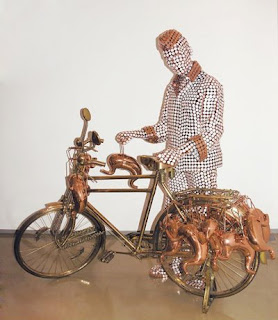 Thinking about the violence around him, Shende concluded that humans have failed to evolve sufficiently. To convey this insight, he puts fibreglass nudes in cast aluminium prams pushed by apes made from brass discs, in a peculiar combination of Rameshwar Broota, Subodh Gupta and Ron Mueck. 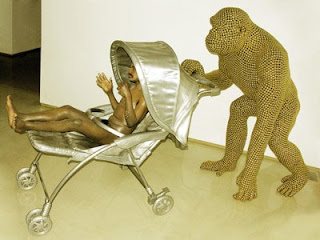 As a tribute to farmers who have committed suicide, he displays an ornate dining table, on which stand salt and pepper shakers filled with soil and ashes. 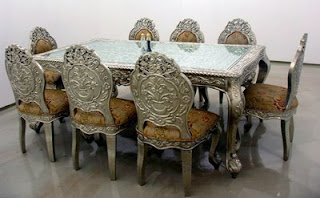 The work, which has affinities with Tallur's glass tube souvenirs of golden barbed wire, is meant to critique the apathy of the rich, but threatens to become a critique of itself. For, if we ought not to eat off fancy tables while poor, indebted farmers are killing themselves, surely we ought not to buy, sell and display exorbitantly priced art either.
Posted by Girish Shahane Girish Shahane at 9:10 AM