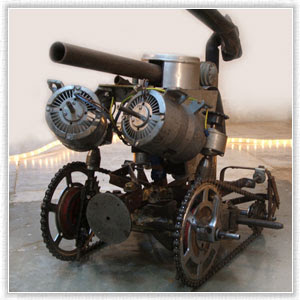 I wrote recently about sculptors who create quirky machines, and two more names can be added to that list: Kausik Mukhopadhyay and Kiran Subbaiah. They are currently showing at Pundole and Chatterjee & Lal respectively, and both exhibitions are well worth a visit.
Mukhopadhyay and Subbaiah make an interesting study in similarity and contrast. The former has transformed the Pundole gallery space into something like the laboratory of a mad inventor who sources machine components from flea markets. The assemblages mirror the chaos of India's bazaars and the mix and match feel of its urban centres. Metronomes go wild at the gallery's far end; closer to the entrance, a tank that can be operated by visitors points its barrel this way and that; a plastic motorcyclist spins round inside a table fan, mimicking the 'globe of death' stunt familiar from circuses.
When I visited the gallery two days after the opening, only one of the dozens of gizmos Mukhopadhyay had dreamed up was malfunctioning, which was pretty good going considering the usual standards of our artists. The contraptions were switched on only when we walked into the gallery, because keeping them going was creating an unbearable racket. 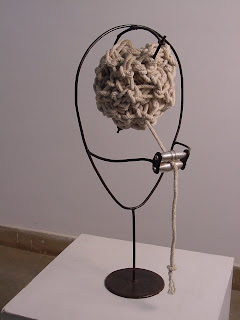 There was no such issue with Kiran Subbaiah's constructions. Subbaiah is a cerebral artist who has degrees from Santiniketan's Kala Bhavan, Baroda's MS University, and London's Royal College of Art. His sculptures and digital prints combine a prankster's humour and anarchistic attitude with precise conceptualisation and rigourous attention to form. In a work titled 'Articulation', a ball of twine serves as a brain, leading out to a dangling 'tongue', which happens to be tied near its loose end. Another ball lies on the floor, prevented from rolling about by attached wheels, instruments of locomotion that have become impediments to movement. On a table close by, a wedge of watermelon has turned into a sickle: slice becoming slicer.
Conceptually-oriented works are often one-trick ponies, and some of Subbaiah's are no exception. Even one-trick ponies can have abiding value provided they satisfy two conditions which have remained constant since Marcel Duchamp invented the one-trick pony artwork a century ago: first, the one trick must be a really good trick; and second, the pony should have some attractive qualities apart from its trick. The sculptures and photographs at Chatterjee & Lal satisfy both conditions.
Posted by Girish Shahane Girish Shahane at 9:34 PM

Was curious about what you had to say about Kiran Subbaiah's show, though I was thinking pretty much the same way about his work. I particularly enjoyed this show - the wit was refreshing. The bit about Duchamp was insightful too. Didn't know about Kaushik's show and look forward to seeing it - will catch it before it closes!
These days there's a lot of talk about aesthetics on the art circuit - suddenly nobody is talking bombastically about prices going over the top and demand and the market etc etc. The change is certainly welcome. Here's the good side to the recession!

Good attractive "tricks" at C&L is right, and makes Kiran Subbaiah's show so refreshing and enjoyable. Some are interactive, others plain quirky, both objects and photographs.

Just as the as yet student Tatheer Daryani makes her debut at the Warehouse so convincingly. Conceptually clear and without baggage and visually stunning and to round it off superbly finished. Would make many a veteran squirm at their often shoddy offerings. A real treat.

"Just as the as yet student Tatheer Daryani makes her debut at the Warehouse so convincingly. Conceptually clear and without baggage and visually stunning and to round it off superbly finished. Would make many a veteran squirm at their often shoddy offerings. A real treat."