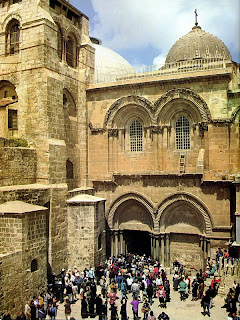 For Good Friday, here's a passage I wrote after visiting Egypt and Israel.

If victimhood is the religion of our age, must be its sanctum. The old city is divided in four, and plaints rise from each quarter, crying, ‘we, too, have suffered’. Dominant among them is the Holocaust, preserved in ’s consciousness through museums and memorials. A single man’s death in two thousand years ago provides a counterweight to the six million Jews murdered by the Nazis in . The instrument of his torture has become the central symbol of the world’s largest faith. Believers come from around the globe to reenact Christ’s final journey, to bear the cross for a few steps, to halt and weep at each station.

Members of 's most populous community, the Arab Muslims, have their own grievances, stemming from the annexation of their part of the city in 1967. Heavily-armed Israeli soldiers stand at every corner, impervious to the resentful looks they receive from shopkeepers and passersby in the tense streets. Muslims are ashamed and outraged that one of their holiest sites, holding the Dome of the Rock and the Al-Aqsa mosque, is under alien control. The armies of Islam wrested the town, seemingly for ever, after centuries of Crusades and Jihads; to have had it taken away in the modern era by a minuscule community is an unendurable humiliation. Inside the complex, a museum highlights the cruelty of the present dispensation. Israeli soldiers have, on occasion, entered the site and even shot protestors within it. Bloodied clothes worn by these martyrs to the Palestinian cause are displayed in the museum. They have become soiled with age, the blood has dried and turned dirty brown, but their power to move the faithful remains undiminished.

Finally there are the Armenians, who exist in such small numbers that they need to advertise their presence, and their own tragedy. Posters glued on walls in their section of town remind visitors of the first genocide of the twentieth century, in which over a million Armenians were killed under the orders of the Young Turks, who had taken over the reins of the fading .

That event, unlike the Holocaust, barely makes the text-books. Most tourists would be hard-put to locate on the map. The Armenians are outsiders for another reason: three of the tragedies which permeate the atmosphere of are interconnected. Christ’s crucifixion, blamed on Jews who were said to have sinned against the light, inspired centuries of European prejudice against that community. The exiles, pogroms and massacres Jews endured in Europe gave birth to a Zionist ideal that could only flourish through suppression of Arab natives. The Armenian tragedy connects to none of this, it is like flotsam washed ashore in a distant land by the tide of history.

Travelling to after visiting brings home the vastly different ways in which people connect to their past. The avenues of ’s capital are lined with magnificent three thousand year old monolithic statues. Sculptures which the world’s major museums would fight to possess stand unprotected, meriting barely a glance from locals. The incredible riches of the , the massive pyramids on the city’s outskirts fronted by the Sphinx, evoke pride among Cairenes, but little passion. , though exceptionally picturesque, comes a poor second to where ancient heritage is concerned. Almost nothing has been found dating from the last era of Jewish control, let alone the earlier age of David and Solomon. There is the Wailing Wall, of course, and a couple of columns here, an arcade there. Yet each stone, each pillar, each church and mosque, is invested with an astonishing level of emotional attachment. The barest evidence of the remains of a Jewish dwelling occasions a grandiose reconstruction. If such revisionings are to be believed, ’s palaces in the time of Jesus were an unflattering mix of Roman and Asian styles. Their lack of beauty and proportion is irrelevant, because the excavated artefacts and standing monuments of , unlike those of , are living history, which is full of evasions, conflicts and lies, but all the more compelling for that reason.