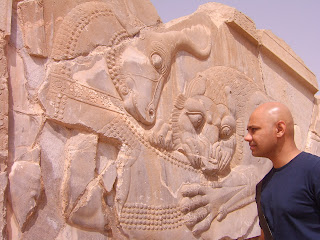 Sunday was spent travelling to and gazing at the palaces and tombs of the Achemenid kings. When one has built up a place in one's imagination the reality is often disappointing. That's what I felt in Greece, with Delos and Knossos. But Persepolis lived up to expectations. Built as a way for the King to show off his wealth and power to visiting foreigners, the site is impressive in scale and quality of workmanship.
Our driver mentioned that many Parsis come to Persepolis, and that it is like a religious site for them. Many Zoroastrians moved to India after the Arabs invaded, he said. Always interesting to hear how locals spin inconvenient facts from their past. In this case, Islam is not in any way to blame for the flight of Zoroastrians, nor are Iranians themselves. It is the barbaric Arabs who were responsible.
As far as I know, the Achemenids were not pure Zoroastrians, though they worshipped Ahura Mazda. The next great Persian dynasty, the Sassanids, who rose about five hundred years after Alexander had defeated the Achemenid king and torched Persepolis, were far stricter in their adherence to Zoroastrian belief. It was made the state religion, and Christians, Jews and people of non-Zoroastrian faiths were viciously discriminated against. This is something Parsis tend to gloss over. Everybody wants to be a vicitim.
This thread of victimhood is stronger in Iranian culture than in most others. It's rooted in the founding story of the Shia faith, the killing of Imam Husain at the hands of Yazid's army. A small band of people, pure in their belief, put to the sword by a powerful tyrant. Following this story, told and retold endlessly, Iranisns tend to believe lost struggles are worth it. That's the logic behind their support of the Palestinians. Asking what the Palestinians have got after sixty years of fighting the more powerful Israelis is almost irrelevant. After all, what practical benefit did Imam Husain and his band receive for confronting Yazid? What does it matter if the Arabs are against Iran, the Israelis are against Iran, the Americans are against Iran? They are all crooks and rascals, and only Iran stands up to them.
Few things are more dangerous than making martyrdom the centrepiece of political ideology.
OK, back to Persepolis. There are many halls in the place. A hall of 32 columns, another of a hundred columns. The Achemenids, like the ancient Greeks, Chinese, Indians and Egyptians, had no knowledge of arches and domes. The bigger a hall, the more pillars they had to put in; the taller the hall, the thicker those pillars needed to be. The temple of Karnak at Luxor is like a forest of bulbous tree. While the columns in Persepolis are slimmer, I suspect those in the back rows had a pretty bad view of proceedings.
An hour's drive from Persepolis is Pasargade (also spelt Pasargad, Pasargada and Pasargadae), the capital city built by Cyrus the Great 2500 years ago. It consist now of four clumps of ruins set in a meadow. The Iranians, having forgotten who actually built these places, gave them fanciful names. Pasargade, for some reason, was deemed to have a lot to do with Solomon's mother.
Pasargadae is very atmospheric: the ruins within a large plain ringed by hills hint at what a great city it must have been in its prime.
On returning to our hotel, I saw my first bandaged nose. Lonely Planet talks of the love Iranian women have for nose jobs, and Jabeens had spotted a couple of post-operatives on the streets. Having noticed one, I began seeing them all over the place. One or two, presumably straight from the operating theatre, wore huge mask-like bandages, while other had an elegant strip running across the bridge of their now-slim noses.
We are back again in the discussion of hijab and its consequences. If all that men get to see of womens' bodies is a few square inches of face, a lot of work needs to be put into it. Loads of make-up is a prerequisite, but obviously that doesn't suffice given the tendency of Iranians to have hooked beaks.
Funny thing is, nose jobs are common in many places across the globe, but only here do women feel no need to hide the fact of their cosmetic surgery.
I'm hammering this out in a 'coffee net' in Shiraz bus terminal. Our transport to Yazd was cancelled and we have a three hour wait for the next coach. Blame the typos on these difficult circumstances, I'll clean up the text once I'm back in Bombay.
Posted by Girish Shahane Girish Shahane at 12:42 PM

For me Persepolis is forever encased in the two lines Christopher Marlowe's Tamburlaine utters with bemused wonder, when he considers what it means to be king of Persia. "Is it not brave," he says to his companions,
"Is it not passing brave to be a king
And ride in triumph through Persepolis?"

Can't resist this... you think since the Persian beaks have remained undiluted on Parsi visages, the Persepolis "pilgrimage" visits should be advertised by a young Parsi entrepreneur here with a free nose job thrown in? :)

The Alhambra takes a lot to beat. And the water still runs thro its courtyard and gardens. Unfortunately so do zillions of Japanese.

Why are you hatless in those hot places ? Sunstroke will get you even if the arabs dont ;-)
S ANAND

DS, I think that's a great idea: offer a pilgrimage that's a truly transformative experience.
SA, I take off my cap for most photos, but am careful to avoid heatstroke otherwise :)