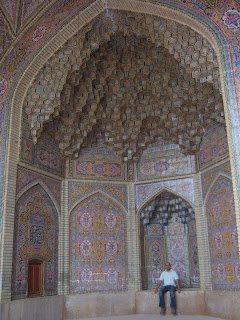 Shiraz can’t be called a beautiful or charming town, but it has more than enough of interest to keep one occupied for a couple of days. After a heavy breakfast, we walked to the Pars museum opposite the citadel, before rambling through Vakil bazaar looking at carpets, ornaments, glassware and nuts. The only thing we bought were two kurtas, both made in India, for Jabeen, who is now reassured she doesn’t have to wear a long coat at all times. The bazaar, like most of Shiraz’s heritage sites, is being carefully reconstructed. Parts of the old town look bombed out, full of crumbling naked brick structures; but everywhere are signs of rebuilding, and whatever restoration work we’ve seen is of high quality.
After taking in the Vakil mosque, we spent an hour at the Shah-e-Cheragh mausoleum. It contains the tomb of the brother of Imam Reza, whose own tomb in Mashhad is the central monument of the Shia faith in Iran. The inside of the Shah-e-Cheragh memorial is a fabulous collection of glass covered ceilings and pillars, room after room of mirrors gleaming over visitors saying namaaz, asking for intercession or just lolling around on the carpeted floors.
A very different atmosphere was found in a madarsa we happened upon, which wasn’t in our guidebook. The courtyard had a garden of the sort Iran specializes in, with flowering and fruit bearing trees. This was a laid back place: clerics relaxed on benches or sat around in alcoves enjoying the spring morning. The Shiraz breeze is cool and refreshing, blowing in from the mountains that ring the city.
After lunch, we headed to outlying sights: first Bagh e Eram in the northwest, a centuries old garden now in the charge of Shiraz’s botanical college. There’s a slightly kitschy nineteenth century palace in the middle of the grounds. On one side of the palace is a traditionally laid out Persian paradise garden. On the other side, foreign influences have been allowed in, involving a Japanese rock garden and a European-style lawn ringed with flowers. The only drawback of Bagh e Eram was that the watercourses had been allowed to run dry. This is always the case in India’s Mughal gardens (except for that tomb in Agra which receives a zillion visitors), but I hoped the Iranians would have kept the water flowing.
We then took a taxi to the tomb of Hafez, a poet every Iranian loves. After having a cup in the teahouse, we climbed to the tomb and were surprised to find it was in an open circular pavilion within a compact square. Visitors sat at the periphery, many reading from the works of Hafez. The divides of the country seemed to melt here: on a bench in an adjacent garden, which contains the graves of renowned artists, two girls sat smoking and chatting. One had her hair dyed blue, the second mauve. The next bench was occupied by women in voluminous black cloaks. There was, however, one tense moment at the site. As we walked up the pavilion steps, we saw a woman resting her right hand on the cenotaph and whispering some words, perhaps a prayer or a favourite couplet. A group of three young things were taking pictures, and one by one, they sat on the cenotaph itself while their friends clicked happily. I was rather taken aback, and so, obviously, was the woman, who went away shaking her head and joined her husband who was staring daggers at the merry trio.
The tension dissipated as more people walked up and did as the woman had done, placing a hand on the inscribed slab of rock and murmuring reverently. Some placed roses on the tombstone.
Our last stop was the Nasir ol Molk mosque in the south east. The taxi driver had a coughing fit as we approached the place, and nearly collided with a van in the process. He stuffed a tissue into his mouth and tried to stop the coughing with such determination that tears welled in his eyes. I wondered if I should offer him my handkerchief, but we arrived at the mosque just then. The driver extracted the tissue, and I saw it was stained bright red. I gave him a 20,000 Rial note, and when he handed 5,000 back, I was tempted to say, “Um, actually, keep the change”.
Iran asks tourists planning to visit from India to have themselves tested for HIV, TB, and Hepatitis A, B and C. Since they’re so concerned about health, maybe they should do something about consumptive taxi drivers.
We were the only people at the Nasir Ol Molk mosque, which made a great end to the day. Till the sun sank, we sat in the courtyard admiring the finely decorated tiles on the facades and the stained glass in the winter prayer chamber, Our guidebook also mentioned ‘exquisitely carved stone pillars’ in that chamber, but both Jabeen and I took one look at them and had the same dismissive thought: You want exquisitely carved stone pillars, come to India.
Posted by Girish Shahane Girish Shahane at 12:07 AM

Really enjoying these posts.keep them coming so we can continue to travel with Jabeen and you. And like all women who have never been to Iran the dress,manner,make-up and the freedoms of 2 vs 3inches of hair showing are always a curiousity!

Fascinating posts; you were born to be a travel writer! Would be great if you are able to post on the contemporary art scene in Iran.

Loving ur travel update, have fun.

Thanks for the wonderful feedback, people, I'll keep the posts coming. Tash, I don't know how much time I'll have to check out the contemporary art scene. Got a few tips from Thomas Erben, who has put together a show of Iranian artists, as I'm sure you know. The galleries are all in Tehran, where we have just two days...

This picture is of the Vakil mosque? The honeycombed ceiling reminds me of the Alhambra. Also,I like the bit re the male becoming the preener in a society where women are kept under wraps!
Sorry for the typos, curiosity etc.

The pic is of the Nasir Ol Molk mosque. Jabeen also spoke of the Alhambra after seeing the honeycomb pattern. There's no comparison in terms of quality, though, the Alhambra is way ahead of anything in Shiraz.