We arrived in Yazd at 9pm, and were accosted by taxi drivers in a manner familiar from India. While we waited for the man we had selected to get his car, another, very grubby gent insisted we come with him. When the car we were awaiting arrived, there was an exchange of words before our man reluctantly signaled that we should go with the other guy. It was a case of licensed taxi versus moonlighter.
At Silk Road Hotel, we were led us across the street to another joint called Orient. “The owner is the same”, the bellboy explained, when I asked what the point was of booking weeks in advance. Silk Road and Orient are restored homes in Yazd’s old city, equipped with a few mod-cons. The rooms are modest, set around a large courtyard in which people gather for meals or just to hang out. Our hotel, unfortunately, was taken over by a group of loud Italians (is there any other kind?).
Yazd is situated between two deserts, and its old quarter consists of winding lanes flanked by houses made from straw and sun baked bricks. The living rooms of large houses are under ground level, ventilated by towers which funnel the breeze downwards. It’s an ingenious way of keeping cool in blazing weather, but, needless to say, doesn’t compare with electric coolers. The traditional houses of Yazd, like those in so many other cities, will soon be gone, replaced by metal and brick constructions. The only exceptions will be those preserved for the tourist trade as hotels, restaurants and museums.
We took a day trip to sites close by Yazd: Meybod, Chak Chak and Kharanaq. Four buildings in Meybod stood out: the fort, caravanserai, ice house and ‘pigeon tower’. The last of these functioned as part of a postal network that used homing pigeons to deliver inter-city mail. Thousands of birds roosted in niches inside the tower, each specializing in one route: Yazd – Shiraz, Yazd – Esfahan, Yazd – Tabriz and so on. Now, stuffed pigeons are places in a few of the niches, to give some idea of how the place must have looked while functional.
Just as the form of the pigeon tower was conditioned by its use, so was the shape of the ice house, a hollow pagoda lined with clay with a tiny opening at the top. Indian architecture is rarely interesting for its mix of form and function; what's important about it usually relates to decorative impulse rather than practical orientation. More on this topic when I return, and have time for a long think-piece.
Chak Chak is an important pilgrimage centre for Zoroastrians, the place where the last Zoroastrian princess disappeared into a mountain. The landscape is imposing, but marred by the guesthouse constructed at the shrine. 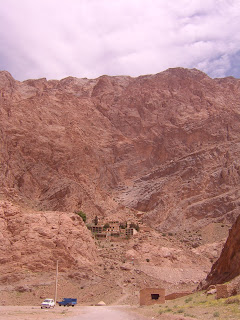 Kharanaq is an abandoned town that hints at how this area must have looked before modern construction took over. The buildings are crumbling fast, a process that an ongoing restoration project is attempting to reverse.
On returning to Yazd, we walked to the Atashkdeh, a temple in which a fire burns that has supposedly been preserved for 1400 years, moving two locations in the process. Continuing the Zoroatrian theme, we headed for the abandoned Towers of Silence at the edge of town. When we got there it was nearing dusk and the gatekeeper said the site was closing. From a distance the towers, built at the top of two adjacent hills, looked like miniature forts, blending perfectly with the hills and landscape. The form of corpse disposal Parsis favour seemed perfectly appropriate, even dignified, in this climate and landscape. We were resigned to viewing the towers from a distance, but our intrepid taxi driver signaled he would get us up the towers, and drove round the back where there was no fence or gate. We began scrambling up the steep side of the taller of the two hills, and realized once again how much easier such climbing appears from ground level than it actually is. Not having expected a hike of this sort, I was wearing sandals and carrying a cumbersome satchel. Both Jabeen and I nearly gave up at one point, but sliding downhill seemed an equally bad option, so we convinced ourselves to keep going, and made it to the top while the last hint of light remained. The interior of the dokhmeh was spare, a circular pit now containing stones and gravel. We walked down the easy way and round the hill back to our waiting cab driver who took us to our hotel. He had a metered cab, unusual in Iran, and the fare at the end was 40,000 Rials: a mere 200 rupees for driving five kilometers out and five back, and waiting an hour. After being consistently charged 20,000 Rials for two or three kilometer journeys, this was a bargain. I tacked on a 50 rupee tip, which the driver accepted with surprise and evident pleasure.
Posted by Girish Shahane Girish Shahane at 8:37 PM