The highlight of my Delhi trip was a visit to Lekha and Anupam Poddar's Devi Art Foundation in Gurgaon. The current show Resemble Reassemble, curated by Rashid Rana, is an exquisite cross-section of contemporary Pakistani art, featuring the work of 45 young and youngish artists. 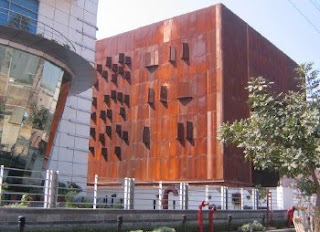 The Devi Art Foundation building, clad in rusted steel, stands out among the glass towers and fanciful facades of Gurgaon's shopping centres and offices. About one in twenty people traversing the road will find it a relief from structures that marry Greek pediments and Rajasthani jharokhas. 95% will see it as an eyesore in the midst of gorgeous edifices.
I don't know how much of what I say about Resemble Reassemble applies to contemporary Pakistani art in general. The Poddars have used their own taste in putting a collection together, and Rashid Rana has added his curatorial vision, concentrating on an international look while downplaying issues of identity and politics, an approach I thoroughly favour. Nevertheless, forty-five artists is a large number. If there were a show of forty-five contemporary Indian artists, I'd consider it a fair survey.
Maybe I'm jaded from seeing too much Indian painting, video and installation, but I found the Pakistanis superior in a number of ways. There was a greater sense of restraint in the pieces, as opposed to the noise and spill that characterises Indian surveys. The use of materials, from motorcycle silencers to eggshells, was innovative, purposeful and finely controlled. Nobody tried to do too much with a single work, but stayed within the limitations of the medium and scale. While cliches were not absent, they weren't as abundant as in a typical Indian show. If I counted right, at least half the artists were women.
I don't have the catalogue and, not having had the leisure of taking notes while in the museum, can't offer a detailed analysis of individual pieces. One thing Resemble Reassemble proved was the injustice propagated by Charles Saatchi in shoving a couple of prominent Pakistani artists (Rashid Rana included) into his gallery's current show The Empire Strikes Back: Indian Art Today. Not only is the notion of being placed in an Indian show inherently insulting (not because of any enmity between the nations; simply because the two countries are distinct), but it is clear that Pakistani art is capable of standing on its own in an international survey. In fact, having seen the Saatchi catalogue, it is clear to me that Resemble Reassemble is a far superior exhibition to The Empire Strikes Back, which has all the defects I mentioned earlier: loudness, spillage, cliches.
Posted by Girish Shahane Girish Shahane at 9:53 PM