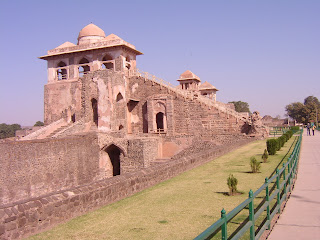 The best time to visit Mandu is in the rains. The government-run Malwa Resort’s receptionist told us peak season reservations are made months, even years in advance. A waiter at the hotel, a UP boy who moved to Madhya Pradesh a year ago, said he’d never seen anything as beautiful as the palaces of Mandu when the lakes were full and the valley lush.
We went when water levels were low and it was uncomfortably warm in the sun, though pleasant in the shade. Because we visited mid-week, we had the monuments to ourselves quite often. When other tourists were around, they demonstrated that, in India, sound expands to fill available space. They stamped and shouted under every dome, seeking echoes; and screamed at each other across buildings to test the acoustics of the site.
In the 1000 years before Indian independence, Mandu was controlled by Rajputs, Afghans, Turks, Marathas and Britons. Of these, only the Sultans who ruled between 1400 and 1600 produced anything of lasting interest. Their buildings run the gamut from early mosques displaying Hindu influences, to austere audience halls, charming pleasure palaces, atmospheric pavilions and tombs small and large. 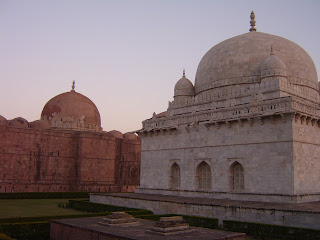 The town sits on an isolated plateau, inaccessible by rail and air. There is no public transport within, no buses, autos or metered cabs. The only way to get around is to rent a bicycle or hire a private taxi. If you own a car, consider driving up to Mandu; it will give you flexibility in planning your sight-seeing and meals. Fill up your tank beforehand, for the local gas station is a woman sitting streetside with a rusty funnel and plastic bottles containing fuel. And don’t drive up at night: a group of locals might be in the mood to waylay and rob you.
Most of the citizens of Mandu and its surroundings are adivasis, tribespeople. Most of them are horribly poor. They live in small huts made from adobe and cowdung. Their ancestors probably lived in similar huts back in Sultanate times, farming a small patch of land, keeping a few goats. The Wikipedia entry for Mandu says, “During its time of prosperity, there was nobody poor in the city.” I have a hard time believing it. Mandu demonstrates how, in India, rulers can come and go without affecting the lifestyle of the people at large.
Changes in politics and technology have, of course, had some impact on the adivasis. I’m not sure if they’re for the better. I suspect tribespeople were better off five hundred years ago than they are today. Forests were more bountiful then, and water cleaner. Improved medical facilities are, paradoxically, partly to blame for a drop in per capita income. Mortality rates have fallen, though they remain far above the national average. While it’s great that fewer people die young, it means couples frequently end up with a dozen or more surviving kids, and few ways of feeding them. The children have to work to survive, which means they aren’t sent to school, which means they’re unlikely to practice contraception, which means they’re trapped for another generation in the same cycle of debt and misery. Meanwhile, they see hotels spring up as better roads make for more tourists. A few, like our driver Bablu, gain employment within the tourist industry, just as, hundreds of years ago, a few must have been employed to build the monuments we travelled to Mandu to admire. 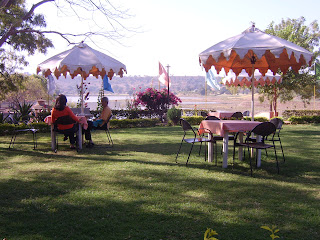 The Madhya Pradesh Tourism Development Corporation's Malwa Resort is built at the northern end of one of Mandu's small lakes. 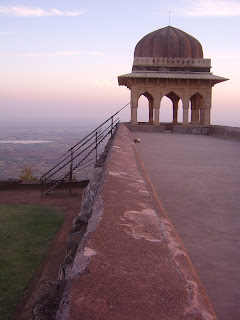 The most popular story connected with Mandu is the tale of Sultan Baz Bahadur and his lover, the village girl Roopmati. Like most such tales, it is half fact, half fiction. Roopmati's pavilion, at Mandu's southern tip, contains a perfectly serviceable inner staircase, but that hasn't prevented the authorities from installing a rickety ladder to disturb the monument's profile.
Posted by Girish Shahane Girish Shahane at 11:08 AM

Awesome location, I have never heard of this before and I will definitely go there in the rainy season this year and thanks for letting us know the ground realities...Srikanth

If we find someplace that is lovely, should we let the world know? Especially, if it is India where there are such few lovely places.

In no times, there will hedious hotels all over and uncontrolled construction...

The heart of India indeed! Nice :)

Madhya Pradesh has some great sites. Will add this one to list. And it does feel the heart of India. Atleast the 21 hour train journey plus 4 hour car drive to Bandhavgarh did.
Did you see the Gitanjali Rao piece on Mandu at BMB?

Yup, and Manisha Gera Baswani has created a whole suite of paintings inspired by Mandu.
I really felt I was in the centre of the subcontinent at Bhimbetka; the rock formations are wonderful enough in themselves to be taken for a holy site, but I wonder if the people who made the earliest paintings there had an inkling of its larger geographical position.