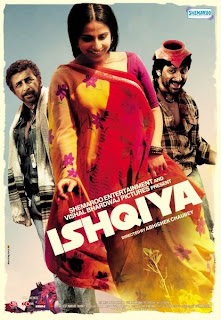 Ishqiya should've ended in a shoot 'em up, but then it might have seemed too much like the climax of Kaminey. A tamer ending was chosen instead, which is a pity. I'm beginning to see a hint of Sam Peckinpah in Vishal Bharadwaj's films (OK, Ishqiya is only co-produced and co-written by him, and directed by Abhishek Chaubey), with mofussil Uttar Pradesh standing in for Mexico. Maybe it's time for a Hindi version of Bring Me the Head of Alfredo Garcia.
Ishqiya requires Vidya Balan to be crazy attractive, attractive enough to get reasonable people to do crazy things. It's a difficult job, being that attractive. Chitrangada Singh managed in Hazaaron Khwaishein Aisi, Brad Pitt in Thelma and Louise. Vidya Balan does not come close. Her own limitations aside, she isn't helped by some weirdly lit frames.
Naseeruddin Shah is not in top form either. Playing a middle aged man in love with a younger woman, he acts a bit too much as one would expect him to.
We are left, as a result, with an enjoyable film that never quite turns gripping.
Posted by Girish Shahane Girish Shahane at 11:30 PM

I am guessing that Balan kept flashing that 1000 watt blinding smile of hers every two second to prove her attractiveness, which didn't help her case.

Not too much smiling; she tries playing it sultry and mysterious, but never hits the spot.

The problem I thought , was even though Ishqiya was good in parts , was let down trying to be more hollywood than Uttar Pradesh. And also since the awareness of what actually goes on in UP is debatable ( I found that Communist - Nepal smuggling angle bit dubious)..Although Arshad Warsi is damn good.

Srikanth, I agree, Arshad Warsi's the best thing in the movie. Also, that it isn't an accurate document of Gorakhpur life. Nor was Peckinpah's version of Mexico, it should be said, but he knew the place well, and Bharadwaj knows UP well, and brings a certain culture and language into Hindi cinema that had been missing before.