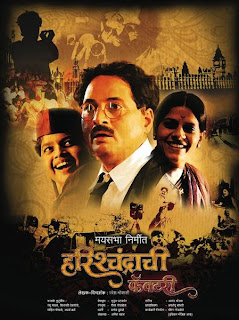 Charlie Wilson, the former Democratic Congressman, died two days ago. The story of his assistance to the Afghan Mujahideen in their battle against the Soviet army was told in the amusing, under-rated Tom Hanks starrer, Charlie Wilson's War. Reading about his death, I wondered when we'd see irreverent biopics made in India. One, it turns out, had been produced already, but I only caught it last evening.
Harishchandrachi Factory depicts Dadasaheb Phalke's struggle to make India's first feature film, an obsessive quest that culminated in the release of Raja Harischandra in 1913.
The film is cinematically rudimentary, featuring boring frames held static for too long; music that appears to be on a loop in parts; pacing that could have done with variation; and good, but unexceptional acting. What makes Harishchandrachi Factory refreshing and engaging is its approach to Phalke's life and work. Paresh Mokashi, who wrote and directed the film, uses a light, deft touch in dealing with the moral scandal caused by the arrival of motion pictures. One of the best-known stories related to the making of India's first film is that male actors played female characters because even prostitutes refused to participate, fearing their reputation and standing would be besmirched. Phalke's trips to the red light district searching for King Harischandra's wife are among the funniest of many bizarre production-related episodes recounted by Mokashi.
Chalk up one more victory for the mini-renaissance of Marathi cinema we are currently witnessing.
Posted by Girish Shahane Girish Shahane at 1:11 PM

The film is charming in bits, but tepid and often tedious, dont you think?
And not a hint of play with light, flickering images, and the thrill of image making that defined phalke's madness.( that one shot where phalke sits with his back to the screen staring into the white light could have been potent rather than sweet)
And with a fine actor like nandu, so much more could have been teased out.

I came away restless.I finally saw the film last night, like you.That is probably the reason for feeling compelled to add to what you have written.

Now, i shall see Navrang.Have you seen it as yet?

I broadly agree, Surabhi, the film is cinematically tedious, though the characters and dialogue saved it from being actually tedious for me, apart from those scenes with the Brits which were atrocious in every way.
The use of archival movies could've been so much more powerful, as could the scene you mention where Phalke sits with his back to the screen.
Having said that, I don't believe Phalke was any great shakes as a film-maker. A brave pioneer, yes, a marvellous artist, no.

Wasnt this India's Oscar entry this year? I am looking forward to seeing the film.

Surabhi, is that 'Natrang' you mean? I saw it and found it an unbearable assault. The worst sort of loud, melodramatic acting and absolutely no subtlety in the script. Though the lavanis are very catchy and Atul Kulkarni has worked hard on his look.

With Harishchandra, my main issue was with the way the story unfolds. Everything is so pat and so easy for Phalke. The scenes are amusing and it's a fun watch, but nothing feels real. And that awful music! I wanted to run away during the London montage especially.

Girish, since none of Phalke's films survive today, how can we know what they were like?

VV, yes, it was out entry to the Oscars this year; never stood a chance.
Jabeen, since nothing in Tansen's voice survives, how do we know he was a good singer?

Besides, bits of some of Phalke's films survived till 2003.

Kamal Swaroop(of Om Dar Ba Dar fame) is also working on Phalke's life and works. It will be interesting to see his take on the Grand Old Man of Indian cinema.

All the bits of Phalke's films which survived had been spliced together into one reel at the National Film Archive, and it was regularly screened for us at FTII. It really wasn't enough to judge the merit of his filmmaking, they were just stray shots including some special effects, very amusing.

Sure, we have no way of knowing the quality of Tansen's singing, but the people who heard him and wrote eulogies to him were connoisseurs of Hindustani music. Not sure how many cinema connoisseurs there were around Phalke, or whether any reliable accounts exist about the quality of his work. I agree he may not have been a great filmmaker, but I don't think there's any definite way for us to know.

The film, interestingly, doesn't really seem to set him up as a great artist either. Just as a crazy guy obsessed with making movies, smart enough to make a success of it.

That reel was enough for me to make a judgment.

It's a good start. Let's hope to see some great stories in the future.

The film's need to be incessantly feel good, avoiding any drama whenever there was scope for it irritated me no end. There was such potential, with the vast canvas of the history of both cinema and the country - that would have given the film much greater depth. We start looking for our own version of a film if it doesn't work for us.

I thought Vibhavari Deshpande was excellent. However, 'cinematically rudimentary' it is, with bad sets and that pointless 3D animation at the end of the film.

True about the feel good bit. At first I liked the idea of downplaying the dramatic potential by portraying the main couple as incorrigible optimists, it had a nice against-the-grain feel to it. By the interval, though, I was thinking, "They may have had a positive attitude, but surely Phalke and his wife had some doubts, felt some depression over setbacks and apprehensions about things like journeying to London without any contact waiting at the other end." All the potential ups and downs were smoothed away.

I felt the scene with the kid injuring himself and Dada deciding to go ahead with the cremation scene with his 'show must go on spirit' had scope for such drama and irony, but they decided to cop put of that one as well, like they did with the camera jamming scene.

This seems to be the overall trend in most films these days - to gloss over tense or dramatic situations with the feel-good-ness of the 'human spirit'. Another recent example is the unbearable 'all is well' from 3 Idiots.

Exactly, Mukul, 3 Idiots had similar issues in dealing with desperate circumstances. At first I was really taken with the ironic use of cliched melodrama in depicting Sharman's poor family. That sort of treatment of poverty is entirely new in Hindi cinema, and very welcome. But at some point it ought to have shaded into a sense that, irony apart, there's a serious underlying problem, and that never happened.

Totally agree with you in the form, What is with all the cheesiness in hindi cinema, just came out watching MNIK , and really felt like kicking Bal Thackeray. If he didn't take a stand opposing to the release of the film , It would have been in the dumpsters already. K jo , bless his dad, has a lot of money and should have opened a cheese factory and not make films. Cheers
Srikanth

In MNIK the very funny part is Obama!