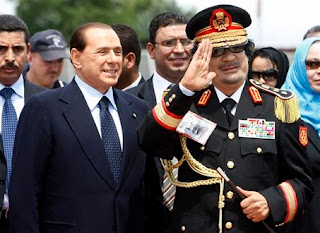 It's been a bad month for multilateral agreements. First it turns out that Greece cooked its books to hide massive deficits. Normally, once the fudge was discovered, there'd be a scandal, the value of the nation's currency would plummet, the IMF or some such organisation would come in with an austerity plan, Greeks would protest on the streets but eventually swallow the bitter medicine. Now, though, Greece has a currency in common with 15 other European nations. Citizens of 15 countries in the Eurozone will pay a price for Greece's recklessness, without any leverage to punish those responsible. The downside of having economic union without political union is becoming evident.
Muammar Gadhafi's latest stunt offers a lighter take on the perils of multilateralism. The guy has a son called Hannibal who was arrested in Switzerland in mid-2008 for beating up two servants while in Geneva. The servants were paid off, and the case closed. The Swiss, though, weren't satisfied, and blacklisted the entire Gadhafi family. Because Switzerland joined the Schengen visa zone a little over a year ago, the Swiss blacklisting means the Gadhafis are forbidden from entering any of the countries in the 25 member alliance.
The move by the Swiss to bar the Libyan dictator and his kin seems specially ridiculous considering the country has for decades profited from money stashed away by tinpot dictators, corrupt bureaucrats and crooked businessmen, people whose crimes go far beyond roughing up a couple of underlings.
Gadhafi's response, predictably, has been equally absurd: he's blocked every single citizen of the entire Schengen zone from entering Libya, including those who've already received Libyan visas. Oil executives from Holland to Italy waiting to fly down to Tripoli to seal lucrative deals are furious with the Swiss, but can do little to alter the present status, since Switzerland isn't even part of the European Union.
Posted by Girish Shahane Girish Shahane at 11:58 PM

I think both Swiss and Gaddafi are equal to the point where they don't really compromise even if they stand to lose something substantial, on another note,I think it is actually a miracle that Switzerland is the only country that hasn't got involved in any wars so far...Cheers Srikanth

Srikanth, the Swiss are a small nation with German, French and Italian populations, stuck between Germany, France and Italy. In those circumstances, being neutral and staying out of wars is almost the only option, no?

I thought there was a conspiracy of Hitler storing a great amount of cash in Swiss ( I am a conspiracy believer) .... ? Srikanth

Strictly speaking, the Swiss have not exactly stayed "out of wars". Switzerland was quite busy in supplying Swiss mercenaries for various wars. So while the State as such stayed out of war, the Swiss cantons all had local militias which were known to be very proficient in warfighting and very willing to enter into combat for others.