Coming out of the Krishen Khanna retrospective organised by Saffronart, my companion, a person familiar with the art world, remarked, "This guy didn't develop much in his career, did he?" I replied Khanna's art had developed a fair amount, but the exhibition didn't demonstrate that fact. Saffronart has gathered an excellent collection of the artist's paintings spanning a six decade career, and then hung them randomly on the walls of Delhi's Lalit Kala Akademi. Laypeople would need to memorise labels and compare canvases in their mind in order to unscramble the selection and create some sort of order from it.
For me, the show confirmed my placement of Krishen Khanna as a bridge between the generation of the 1950s and that of the 1970s. Khanna was born in 1925 in what is now Pakistan, and studied in England before settling in independent India. He was employed by Grindlays Bank, and grew friendly with artists like Husain, Padamsee and Tyeb Mehta. His own painting, largely self-taught, was immature through the fifties and sixties. Saffronart's retrospective has a few examples of these early works, which resemble student studies, like this painting from 1956: 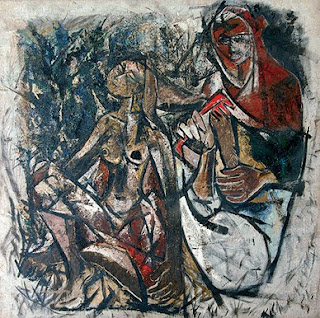 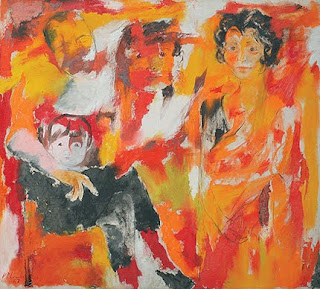 He really found his voice in the early 1970s, with portraits of working class citizens of Delhi. The images capture some of the feeling of hopelessness of the era. 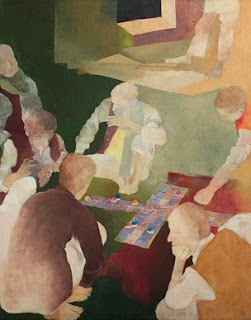 Artists in the 1950s had concentrated on the human figure, but painted it without associations of class and location. This changed in the 1970s, with artists like Bhupen Khakhar, Arpita Singh, Anjolie Ela Menon, Nalini Malani, Jogen Chowdhury, Gieve Patel, Sudhir Patwardhan and others beginning to see identity in social rather than universal terms. That's why Krishen Khanna seems a better fit with these younger artists than with those of his own generation.
In the 1980s, he began painting brighter canvases, using more impasto and picturing jolly bandwallas instead of squatting cardplayers. 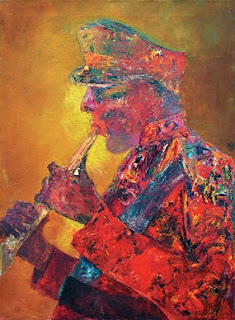 In the work created at the end of the decade and the beginning of the 1990s, the figure sometimes almost vanishes in a razzle dazzle of red yellow and green. 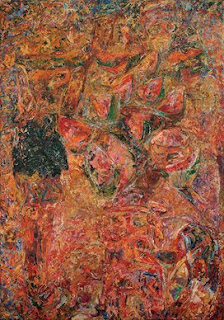 Over the past decade, the quality of Khanna's work has dipped significantly. Awkwardly foreshortened figures and crudely expressionist emotions dominate, and his brushwork has lost its energy, its vitality. 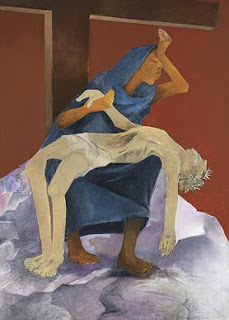 All these images are copied from the Saffronart website and are part of the show, which closes on the 5th of this month. Looking at the catalogue makes me regret once again that the show was not hung largely in sequence. Sometimes it's best to adopt the simplest solution.
Posted by Girish Shahane Girish Shahane at 4:38 PM

Hi Girish,
So glad you could see the show, and thanks for the feedback. Krishen actually requested that the exhibition be hung 'visually' rather than chronologically, and spent a day overseeing the positioning of each work himself. The print and online catalogues, however, have been organized chronologically.
Best,
Nishad

Hi Nishad,
Thanks for the info. There had to be some unusual reason for the show to be hung the way it was, I was sure Minal would never have done it that way, but when the artist himself wants it like that, what can you say?
Krishen Khanna's recent paintings, as I've mentioned, don't match up to his best work by a long shot, and I guess at 85 he isn't the best guide to displaying his work either. A bit like T.S.Eliot reading his own work, awful to hear.
Girish

I write on behalf of Saffronart. Saffronart recently held an interactive seminar with Krishen Khanna, one of India’s most prominent and critically acclaimed modernists. This is the second in a series of interactive events that Saffronart is hosting globally to increase awareness and broaden the discourse surrounding modern and contemporary Indian art. Coinciding with the major retrospective of Krishen Khanna’s work that Saffronart presented at Rabindra Bhavan, the Lalit Kala Akademi, in New Delhi from January 23 – February 5, 2010, this discussion offers an important and very personal insight into not only the development of the artist’s own work, but the evolution of modern Indian art over the last half century as well.

The 30 minute long audio discussion has been uploaded on the Saffronart website, along with the transcript. We would appreciate if you could provide a link to the discussion on your website.

The same can be accessed at:
http://www.saffronart.com/sitepages/audiostreamingview.aspx

Krishen Khanna: Born in 1925, Krishen Khanna is a largely self taught artist. Bordering on the narrative, Khanna’s work captures moments in history, much like photographs do, but the artist’s technique is far from photorealist. Khanna transfers his observations onto the canvas with spontaneity and exuberance, keeping the representational elements of his subject matter intact. The artist’s use of colour and his expressionist brushwork make the mundane rise to the challenge of the creative.

Khanna studied at the Imperial Service College, Windsor, England, from where he graduated in 1940. After his family's move to India, a job with Grindlays Bank brought him to Bombay where he was invited to be a part of the now famous Progressive Artists’ Group. In 1955, Khanna had his first solo show at the USIS, Chennai, and since then has been exhibiting his work widely in India and abroad.

Recognizing his immense contribution to Indian Art, the Government of India has bestowed several honours upon him including the Lalit Kala Ratna from the President of India in 2004, and the Padma Shree in 1990. In 1964, Khanna was artist–in-residence at the American University, Washington D.C., and the next year, he won a fellowship from the Council for Economic and Cultural Affairs, New York following the travel grant they had awarded him in 1962.

Dinesh Vazirani: He is CEO and Co-Founder of Saffronart, and an active participant in the development of the Indian art industry. A frequent speaker and a leading industry expert, Dinesh has been collecting and promoting Indian art for the last fifteen years.