The death of Tut 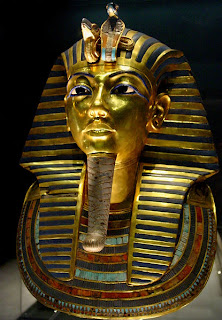 Not long ago, it was suggested that King Tutankhamun died of a broken leg and fractured skull, possibly a war injury, possibly murder. That theory has been overturned by a two-year long DNA and CT scan study on his mummy, and his mummy's mummy, and his daddy's mummy, and his daddy's daddy's mummy, and his mummy's mummy's mummy (stop me, somebody). His daddy's mummy, it is now confirmed, was also his mummy's mummy, and his mummy's daddy was also his daddy's daddy. In other words, his parents were siblings, an unfortunate tradition among Pharaohs. King Tut was hobbled from birth by congenital defects. He walked with the help of canes, which explains the dozen plus found in his tomb. At the age of 19, he was infected with malaria, which overwhelmed his weak immune system. The malaria probably led to a fall and that broken leg.
The hole in the skull was made during mummification.
Tutankhamun, as anybody who has read a bit of Egyptian history will know, was a minor Pharaoh. His anonymity kept him relatively safe from grave robbers who plundered tombs of better known monarchs like Ramses II and Tut's grandfather Amenhotep III (his mummy's daddy as well as his daddy's daddy). Some 3200 years after Tutankhamun died, Howard Carter broke into his burial chamber, which contained an astonishing treasure trove, now displayed in Cairo's Egyptian Museum. If a king as unimportant as Tutankhamun could command such a great hoard of gold and alabaster artefacts, it boggles the mind to imagine the original contents of the tombs of the greatest Pharaohs.
It's funny that a mosquito bite should have led to Tutankhamun's death, considering one also caused the demise of Lord Carnarvon, financier of Howard Carter's expedition. A few weeks after Tut's tomb was opened, Carnarvon, still in Egypt, was bitten by a mosquito; the bite got infected, Carnarvon lanced it while shaving, causing the condition to worsen. He died of blood poisoning a few days later, an event that gave wide currency to the idea of the Mummy's Curse.
Posted by Girish Shahane Girish Shahane at 8:46 AM

I know it is lazy of me but could you put some references of where you get all this delicious history from.

Actually it's laze of ME not to put them in. I want to switch to a mode where links open in new windows. I'm bugged that Google doesn't allow such a switch easily. I hate it that every time people click on a link on my blog, they're taken somewhere else and have to click the 'back' button to return. So I've been scrimping on the links off late.

Actually, I was more interested in Tut's daddy than in his mummy, but too lazy to write more that day. Will post about Akhenaten today, tell me more about the aunty bit...

Man, you should have been my history teacher when I was at school, not that I am enjoying any less now...Srikanth

Was trying to confuse you like I got confused...but like Srikanth says you are a fine history teacher and can't fool you.

There was an article in TOI which had a headline "King Tuts mummy was his aunt" which I initially misread as the mummy being that of his aunt.

Then even tho was explained without mummy daddys which should be simpler, but was not, realised they were saying what you have said.

Then I got miffed. they could have said King Tuts father was his uncle, which would have removed the pun on mummy and kept things simpler, no?

These Egyptians sure know how to confuse thousands of years down the line and TOI ofcourse tests us everyday albeit inadvertently!

DS you are very funny.

The walking with canes thing is sad, isn't it? Apparently even the pomp and wealth of the pharaohs doesn't add up to much when it comes right down to it.

I saw the BBC clip on some forensic types working with Tut's remains. Had to wonder if this was what the Egyptians had in mind when they went to all the trouble of developing mummification. I'm thinking not.

True, Seana, there's something very sad about the mummy room in the Egyptian museum, with all those dessicated corpses of Pharaohs and their spouses laid out for public view.

How the mighty are fallen. Or something like that.

Yes, the Egyptian museum mummy room really gives one that 'how the mighty emperors have fallen' feeling.

But the first mummy I saw in my life was at the Ashmolean in Oxford, while Girish was there and I went to visit. It was a weekday afternoon and I was almost the only person there, the halls were silent and the room a bit dimly lit, and it was most eerie and impressive. Whoever that minor official was, he's ended up better off than Ramses and Tutankhamum I think...

One of the few places I can remember having a sense of awe about the dead before me was Napolean's Tomb in Paris. It was supposed to have that effect on you, so I was kind of surprised that it actually did.