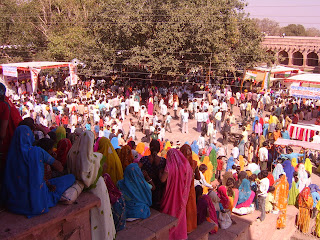 Our final morning in Mandu coincided with Bhagoriya, or elopement, festival ('bhag' means run), one of the most special days in the adivasi calendar. We scooted before the celebrations reached their peak, and before our driver could drink himself silly (he not only drove well, but provided a lucid account of adivasi life, on which this post is based). Starting around noon, troupes started arriving in Mandu's main plaza from surrounding villages. Each band carried one massive dhol along with accompanying instruments like flutes. The music, dancing and drinking began soon after. By 5pm every adivasi man and woman (and many children) would be tanked. Then some form of exchange initiated by a female (the acceptance of paan, a little gulaal applied to the chosen man's cheek) would seal her partner for the night, provided he wasn't too inebriated to perform. Men, apparently, don't have much leeway to reject girls. In most cases, parents negotiate with the boy to settle a marriage, otherwise it's just a one-night stand. Among the adivasis a payment is made by the man's family in advance of the wedding, reversing the practice of dowry prevalent among caste Hindus. As a result, girls aren't viewed as a burden, and no selective abortions are practiced.
Unfortunately, the sly intercession of political parties has upset the traditional progression of bhagoriya performances. Look carefully at the picture and you'll see four different platforms in the square. Each was constructed by a political outfit (the BJP, Congress and two adivasi organisations). Loud announcements were made continually on squeaky microphones, drowning out the music that was being played without the benefit of loudspeakers. It was great to see the blaze of colour, the gaudy sarees and the turbans bigger than heads, but otherwise the tamasha wasn't what we'd anticipated or hoped for.
Posted by Girish Shahane Girish Shahane at 8:13 AM

Wow...I mean seriously wow!! I know have one more reason to visit the place...

That's quite fascinating--both the tradition and the modern encroachments. Wonder how it all evolved in a country where the usual practice has been the reverse.

Seana, these people were here long before Hinduism evolved; their beliefs are much older than what one might call the Hindu belief system and social structure.
Hindus have tried to incorporate adivasis into their own pantheons with some success down the centuries, but the differences are still wide and apparent in areas where tribespeople dominate.

Got it. I was thinking of these as being two things that developed alongside each other. It makes much more sense Hinduism follows and overlays this.

Speaking of ancient civilizations, are you going to do a post about the enormous sculptural head of King Amenhotep that was just unearthed in Egypt? Comparing it to your recent post on the hieroglyphics of his son, it would seem things deteriorated pretty fast. Or have I got that wrong too?

Fabulous looking head, isn't it? I considered alluding to it, for precisely the reason you mention, that it makes a good contrast with the Akhenaten-era stuff. I guess I'll wait till they put it together with its body.
It's part of a funerrary temple complex that has vanished because it was built at the water's edge, but it must've looked astonishing when first constructed.

It is an amazing thing, even just lying on its side in the gravel.

Totally puts the lie to progress, of course.

I'd take an optimistic spin and say that the proximity of the stands is a reflection of the level of malice between the parties (at least on this local level). In the US you'd have to have the Republicans (esp the Tea Party advocates) and the Democrats miles apart with a cordon of cops in between.

That's true, Adrian, there seemed no great rivalry between factions in the plaza.