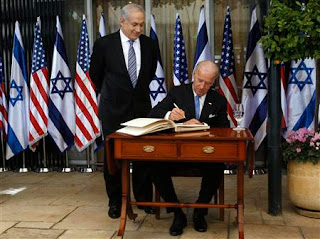 The Israelis obviously thought the Obama administration was too busy with internal issues to pick a fight in the Middle East. I'm glad they were wrong. For far too long Israel has been given carte blanche to do what it wants in territory it seized by force in the past: build settlements and security walls, blockade, invade, deny Palestinians the right to movement, the right to livelihood, any rights at all.
Every time a peace plan is drawn up, the Israelis agree not to expand or build settlements, and then proceed to expand and build settlements. It must seem like a charade to them by now, which is why they announced a new building plan in East Jerusalem even while Vice President Biden was in town. When he expressed displeasure, the Israelis moved to Plan B, which is apologise but continue to expand and build settlements. It seems now that Obama and Clinton want actual evidence of real actions rather than words, a demonstration on the part of Benjamin Netanyahu's government that it is seriously interested in resolving the Palestinian issue through dialogue.
The Jewish American lobby has immediately gone to work in favour of Netanyahu. American newspapers are full of commentaries stressing Israel's stragetic importance to the United States. I don't understand this. In what way does Israel's existence help the USA? I can't think of a single important strategic objective that the US gains from the relationship. All it causes is anger in the Islamic world directed toward the United States.
This is not to suggest the US should abandon an ally in the interest of pleasing populations and governments which, in many cases, do not adequately respect human rights. But let's stop the 'strategic interest' humbug and recognise that Israel needs the US, the US does not need Israel. Somehow, both Israelis and Americans have forgotten this fact, and the result has been a ridiculous tail-wagging-the-dog scenario playing itself out for over a decade.
Posted by Girish Shahane Girish Shahane at 8:26 PM

There are plenty of members of the "Jewish American lobby" who despise Netanyahu. What you're thinking of is the pro-Israel lobby which is a different thing all together and contains many Jews but also (very important in GOP circles) born-again Christians and evangelists.

Calling it the Jewish American lobby is just plain wrong. Most people are surprised to learn that Jews make up about two and a half percent of the population of the United States. Israel is supported by about 70 percent of the US electorate. Thats a lot of non Jews.

Well, Adrian, we can slice it different ways. I could say, for example, that there are many people in the 'pro Israel lobby' who despise Netanyahu, so you are wrong to use that nomenclature to refer to the people criticising the Obama administration right now.
The example of the Anti-Defamation League is a good place to examine the 'Jewish' and 'Israeli' crossover in the US. The ADL says it is against anti-semitism. Yet, it criticises General Petraeus's recent comment that the lack of resolution to the Palestinian issue is a cause of anger against the US, because the US is perceived as being partial to Israel
Now, nowhere did General Petaeus say ANYTHING about Jews, the words Jew and Jewish weren't even mentioned by him. And yet an important American Jewish organisation dedicated to fighting anti-Semitism goes on record to contest what he said, calling it 'dangerous and counterproductive'.
Anybody who has ever criticised Israel in the US has ended up being branded an anti-Semite. So the cross-over between 'Israeli' and 'Jewish' is something that Jewish organisations and prominent Jewish individuals in the media in the US themselves promote. As such I'm comfortable calling it the Jewish American lobby, while also acknowledging that there are hundreds of thousands of Jews in the US who do not support the views of that lobby.

Adrian, the entire world knows that the Israel-Palestine issue has historically been portrayed differently in the US media compared to the rest of the world. And this is not because the most powerful echelons of the media see an over-representation of born again Christians and Evangelicals. It is because there is a disproportionate representation of Jews at that high level, and they have consistently justified the worst crimes perpetrated by Israel.
The New York Times is a prime example in this case, impeccably liberal except when it comes to the Israel cause.

Yes but calling it the Jewish American Lobby isnt factually correct and it is dodgy. Its like saying "all Indians think this..."

Which Jewish Americans do you mean? Noam Chomsky and Tony Judt?

And the ADL? Give me a break. You should read Christopher Hitchens (who had a Jewish mother)'s many attacks on the ADL some time. The ADL used to represent mainstream Jewish American opinion but not before it began wading into politics in the Reagan years. It's thoroughly corrupted now. Tony Judt has some very good stuff on the ADL too.

I think you'd agree with 99 perecent of what Judt says on Israel/Palestine, but as you'll see he's very careful about what he claims and doesnt claim.

I'm hesitant to jump in here at all here, because I am hardly the most informed person on the Middle East. But I did have a much beloved professor here in California, who was British, Catholic, Yorkshire born, Oxford educated, and he and his wonderful wife spent a lot of time in Israel in the cause of peace. I remember him saying that their test was that at the point they found themselves taking sides in this very complex issue, it was time to come home. This guy believed in the power of story and I bet I remember most if not all of them. He did understand the situation of the Israelis in the aftermath of the Holocaust and he also understood the situation of the displaced Palestinians. He's gone now, but I try to stay there in the middle ground with he and his wife, though what good my stance is to anyone apart from myself, I'm not at all sure.

Adrian, I get where you're coming for, so let me say that the key word for me is 'lobby'. Noam Chomsky takes, of course, a very different position on Palestine than most mainstream American mediapersons, but he is not part of any lobby group. To the extent that Jewish Americans have lobbied as Jewish, they have generally done so not to secure anything for American Jewry, but for the cause of Israel, and in this they have generally been supportive of whatever Israel does (including, of course, initiating the peace process). The point is that these lobbyists are more concerned about the well-being of Israel than the well-being of the USA, and the two are very different things.
You are right that my statement could be read to mean, 'all Jews believe X', but then yours could be read to mean 'all pro-Israelis believe X". Having said that, I grant 'Pro-Israel' is a less loaded term than 'Jew'.
What you say about the ADL is exactly right; that's the sort of Jewish American 'lobby' I'm attacking.

Well Peace Now is one of the biggest and most powerful of the anti occupation lobbies but there are many others. Peace Now is mostly made up of left wing American Jews and they are a not insignificant presence in Washington and in the US media. Peace Now of course is utterly opposed to Netanyahu, Foxman and the ADL etc. People who have spoken at Peace Now events include Hitchens, Chomsky, Judt and many Congressmen and Senators.

Jewish lobbies run to every shade of opinion on Israel/Palestine in the US. From the far left to the far right. There are even big Haredi lobbies in New York and NJ who oppose completely the existence of the state of Israel (because its a blasphemy) and thus oppose any candidates who support Israel.

Its actually a lot more complicated than it gets portrayed in the US and esp the non US media.

Of course there is a powerful pro Israel lobby in the US but it by means no represents the majority of Jewish opinion and I would guess that the pro Israel lobbyists who have the most influence with congress are the born again Christians and the Evangelists, whose motives Jews are right to be suspicious of.

Adrian, I thought Peace Now was an Israeli outfit, at least at its inception. I've heard of a new lobby group called J Street, which explicitly seeks negotiated settlements between Israel and Arabs, and marks a big shift from other Jewish (or Pro-Israel) lobby groups.
As I've stated before, while born-again Christian and evangelical groups have clout, it is mainly with the Right. The interesting thing about the media and politicians in the US is how unquestioning they are of the Israeli position BOTH on the mainstream Left and the mainstream Right.
This is why Israel has survived censure in the UN for decades despite neutral reports cataloguing war crimes, the latest as recent as two years old, written by a Jewish investigator yet castigated for being biased.
Whether there's a left-wing or right-wing government in power in the US, it can reliably be expected to veto any measure critical of Israel, and be supported in this by the media on both the Left and the Right. This was true long before the rise of the Moral majority, and the shift within right-wing Christian groups from suspicion of Jews and, by extension, of the Jewish nation, to unstinting support for Israel.
We can always analyse matters at a deeper level of granularity and find facts that complicate the big picture, but the broad truth remains clear.
I never said the Jewish American Lobby represents majority Jewish opinion.

Girish
If I am hopeful of everything in this world but the question of Israel-Palestinian issue.
My pessimism gushes out to say let us not discuss this as the lies, the one sidedness of this affair,
the unaccounted massacre of innocents is in this dispute only.
The saying "Qatil bhi wahi aur munsiff bhi wahi" applies directly.
Girish its not the lobby alone it is the interest of US in Middle East that makes it turn a deaf Ear and Blind Eye to wanton behavior of the illegitimate child "ISRAEL".
Now the other side is also not very clean to observe. Its tainted with leaders who encourage Infighting, power mongering, corruption, has just no sympathy towards the man on the street.
Girish the truth, Politician of today needs the following qualification anywhere in the world be it a person in suit or a dhoti
1. Art of lies.
2. Hard Heartedness
3. Corrupt to the core
4. Selfishness
5. One who loves to fill his/her coffers.
6. Convert non issues to issues.
7. Rake up the emotions of people.
Nowhere in the world today is this species different from its counterparts elsewhere.
Israel vs Palestinians less said the better as neither is ready to decide and negotiate.
USA plays its cards more to save itself rather then reprimand its illegitimate child's behavior.