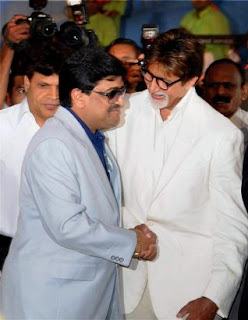 One of the many annoying things about Narendra Modi is how he equates himself with the state of Gujarat. Whenever Modi's administration is criticised, particularly with respect to the riots of 2002, during which a thousand mainly Muslim citizens were killed under his watch, and probably with his connivance, the Chief Minister proclaims that all of Gujarat has been insulted. I'm astonished at how many people actually fall for this humbug.
Now the Congress has made the same equation between person and state, approaching it from the opposite side. The party, currently engaged in a needless spat with Amitabh Bachchan, is arguing that Bachchan's promotion of Gujarat as a tourist destination implies support for Narendra Modi's government.
Congress spokesperson Manish Tiwari wants Bachchan to clarify whether he supports the Modi government's role in the riots. I have a question for the voluble Tiwari: if your party is so concerned about victims of mob violence, why have successive Congress governments in Maharashtra taken no action on Justice Srikrishna's report, which nails the perpetrators of the 1993 Bombay riots?

Update, March 31: Here's the usual Modi mode again: On his blog, Modi wrote, "Unsubstantiated criticism of the land of Gandhi, Sardar (Vallabhbhai Patel) can never be tolerated. Gujarat will give a befitting reply again, and again and again come what may." He claimed that his appeal "had not been heard by those who are bent upon defaming Gujarat nor do I foresee that it will be heard by them now."
Posted by Girish Shahane Girish Shahane at 9:53 AM

Girish
This is the gimmickry, deception which Bal(d) Thuck-Har-Ke used against the people of Bombay.
He and cronies made the people feel that they are the Messiahs and well wishers and whenever any of their ill-doings came to the fore they First played the Hindu-Muslim card once that died they tried Border issues with Karnataka, then they decided to start Marathi Manoos story.
Modi's story is no different this guy is slimy, decpetive and tries to play on the emotions of people. Associates anything anyone in the world says about his dark deeds as
directed towards Gujarat and Gujaratis.
Girish we have seen the Thuck Har Kays, AD-AKASH-Vani, Kalyug Singh and now it Nod-Karni.
MODI NEEDS TO BE TOLD ONE THING YOU CANNOT FOOL ALL THE PEOPLE ALL THE TIME.
All the politicians are disgraced with a few exceptions their cupboards are overflowing with dark deeds, bribe, deceit, false self pride, so much to say.
India will be a Developed Nation when this trash in politics is removed and it will happen I am hopeful as always.

It is very interesting to see the congress make Amitabh the real opposition and not Narendra modi, Manish Tiwari should be asked for Amitabh's stand during the Delhi riots against Sikhs, as congress himself gave him a ticket to contest from Allahabad ( which he subsequently won ),We have two incompetent parties ruling us , and the scary thing is BJP as opposition is a fucking joke!!! It should be sued!!, Nitin Gadkari , supposedly the gen next ( personally think he should have been in the seventies ), leader still thinks muslims should give the land to construct Ayodhya, too much WTF going on ...Srikanth

Absolutely, the 1984 Allahabad election comes immediately to mind. As for the BJP, apart from that ridiculous Ayodhya suggestion, why is the party so glamour struck? That's a crazy list of party officers Gadkari came up with.

Arre people are thinking the BJP's getting AB to go campaign for them from the West [while and they already have Varunbaba up north] and this will take the whole country by storm because we're all so going to vote for whoever Amitabh tells us to. Oh wait. Shouldn't say these things out loud even in sarcasm.

anyway, this is why the congress is discrediting amitabh. they don't *really* care. ooh btw this is SO fun to read: http://www.openthemagazine.com/article/art-culture/kabhi-here-kabhi-there

shobhaa de has a post on her blog on this same subject and much tho i dislike conspiracy theories, i think she has a point. there was a desire to demonstrate that they had the ability to make life messy for AB , did so and once the law of diminishing returns came into effect, pulled back the bulldogs. Remember this is the same dispensation that made Aishwarya make visits to customs offices on some stuff a fan had sent her , when she was dating ABjr. SA

There is a difference between criticizing Modi as a person and Modi as a Chief Minister. He is not equating himself to Gujarat for his own personal benefits. No matter the liberal media likes it or not, Narendra Modi is doing a smart task in ushering in development in Gujarat and playing the development card really well to get votes.

When the dynastic party of India employs unfair means to win elections, why not use legitimate means by showcasing one's development to win over people? The whole problem arises because people are stupid to vote for the wrong person. If a person is stupid and contented because of development largely because of Modi's government, I don't see anything wrong in playing the emotional card to get votes.

Little does the media realize that such foolishness on the part of Congress will only help Modi in the longer run. If that isn't good for the development of Gujarat, I wonder what is!

1) Who is criticising Modi as a person? I haven't heard anybody criticise his personal habits. All criticism has been directed to thing he did as Chief Minister.
2) He equates himself with Gujarat to help himself electorally, that's definitely a personal benefit.
3) You don't mention any specifics about unfair means, and your comment about stupid people voting for the wrong person could apply to Modi too.