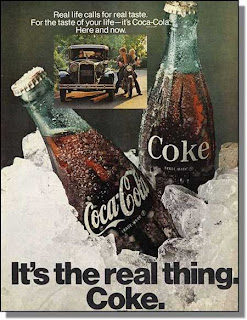 As kids we heard that the Coca Cola company produced the world's most popular fizzy beverage using a secret formula that was locked in a Swiss vault and known to only a handful of top executives. The drink had, at the time we heard this story, been banished from India. After its return in the 1990s, a friend complained we weren't getting the real thing. The Coke he'd drunk on his recent US trip had a superior kick and flavour. To get the real Coke one still had to go to the USA, he insisted.
Around that time, I learned that, even if the story about the secret formula had once been true, Coca Cola in the USA certainly no longer followed that recipe. That was because it used high-fructose corn syrup instead of sucrose, or normal sugar. It had switched to HFCS, as had most other fizzy drink producers in the US, because subsidies provided by that country's government to corn growers made HFCS cheap, while tariffs imposed on sugar imports made that commodity relatively expensive.
Today, the average American consumes a little over 17 kg of HFCS per year, compared to a little over 21 kg of sucrose, a startlingly close race considering HFCS is an industrial product never used for cooking on a small scale. Since US obesity rates began to spike at around the same time as consumption of HFCS, conspiracy theorists have pointed to it as the cause. All they have to go on, however, is correlation without any established causal link. More recently fructose has begun to be identified as a villain, because it puts a greater burden on the liver than glucose. This scare-mongering article by Dr. Joseph Mercola connects fructose, HFCS and the ills that plague America's diet. The connection doesn't seem far-fetched at first glance; after all, a commodity referred to as 'high fructose' must be high in fructose, right? Not quite. Normal sugar, like HFCS, is composed of a combination of fructose and glucose. While the most commonly used HFCS variety has a fructose to glucose ratio of 55 : 45, sugar contains the two in a 50 : 50 balance. There's little daylight between the two in terms of fructose levels, something Dr.Mercola conveniently downplays.
Now, a new Princeton University study has suggested that HFCS causes significantly greater weight gain than the same calories ingested in the form of sucrose. It isn't the fructose level to blame, apparently, but the way the body breaks down HFCS as opposed to sugar. Expect immediate pushback from the HFCS lobby led by the likes of Archer Daniels Midland, the company at the centre of Stephen Soderbergh's amusing film The Informant. The movie starred Matt Damon as Marc Whitacre, the man whose co-operation with a US Justice Department price-fixing investigation cost ADM at least $500 million.
Posted by Girish Shahane Girish Shahane at 4:11 PM