Forbes magazine has released its latest billionaires list. Bill Gates, for the first time in recent memory, has been superseded at the top of the charts. The new richest man in the world is Carlos Slim, a Mexican of Lebanese extraction whose original surname was Salim. 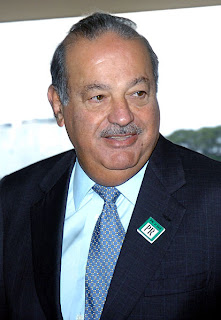 Gates has slipped a notch partly because he's given away billions. The other reason is that the company he founded, Microsoft, has spent a decade in the doldrums. Exactly ten years ago, on March 10, 2000, the Nasdaq reached a peak of 5132 intraday, 5048 closing. That Friday, investors in technology stocks went home happy, as they'd done most evenings for a number of years. They woke on Monday to a different world. The Nasdaq opened 4% down, a sign the tech bubble had finally burst. The index hasn't come anywhere close to its previous peak in the subsequent decade. 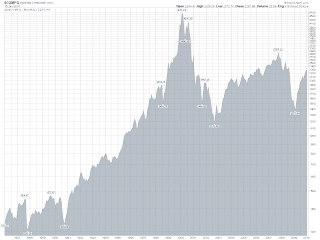 The trigger for the fall is unclear, but one cause was investors' fear that Microsoft was about to be declared a monopoly. That happened on April 3, when Judge Thomas Jackson suggested the firm be broken into two.

Microsoft lost over half its value between December 1999 and May 2000, much less, it has to be said, than many other tech companies. The problem is that the company never recovered, and spent all of the noughties hovering in a range between 20 and 30 dollars per share. Considering the number of products launched in that period: the Xbox, Windows Vista and the Zune MP3 player to name a few, the steadiness of the Microsoft chart is remarkable.
When companies like Apple and Google began to create more noise than Microsoft, Gates was dismissive, confident his firm, which at the time was ten times the size of the insurgents, could muscle them out before they became serious competitors. While Microsoft flatlined, though, Apple and Google soared.

Both now have a market cap of around 200 billion dollars, compared to Microsoft's 250 billion; it seems only a matter of time before one or the other passes Microsoft to become the most valuable tech company in the world. Something tells me Bill Gates will be more upset when that happens than he is by the latest Forbes rankings.
Posted by Girish Shahane Girish Shahane at 12:35 PM