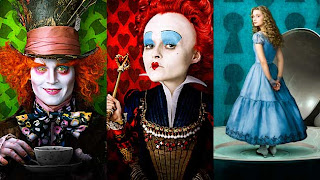 The best I can say about Tim Burton is that I prefer Mars Attacks to Independence Day. Burton's Alice In Wonderland, which should be called Return to Wonderland or Alice in Underland, is a disappointment on most fronts. It mangles the story of the Alice books into something like the Narnia tale of good battling evil. Except that Burton doesn't believe in good, so he makes it a fight between evil and less bad.
Some of the characters , like Tweedledum and Tweedledee and the Cheshire Cat, are nicely imagined. But making the Mad Hatter, the Doormouse and the Rabbit into subversives determined to restore order to the land by replacing the Red Queen with the White one was never going to work.
The music stands out for its atrociousness, Burton must be tone deaf to have allowed that stuff within a mile of his film. And the special effects make you appreciate exactly what an advance Avatar constitutes. The most disappointing thing about the 8.45 pm screening we caught at INOX was the lack of kids in the auditorium. Scanning the crowd when the lights came on at the interval, I noticed just four children in a crowd of about 100. I can understand 10th graders being preoccupied with their exams, but the low attendance of youngsters, and the consequent failure of Alice In Wonderland at the Indian box-office, signals that even ten and twelve year olds these days are being made to sit home cramming text books.
Posted by Girish Shahane Girish Shahane at 10:16 PM

I think he's probably been told he's a genius once too often. I did like Nightmare Before Christmas, though.

Has anyone ever really made a good Alice movie? It's a difficult undertaking.

Haven't seen that one, Seana, but have watched eight or ten of his other films and not really warmed to any of them. I mean, what's with the deathly pale make-up which all his main characters seem to use?

The Night Before Christmas is animated, so that may help a little. It's probably a minority position to think that Johnny Depp and Tim Burton are not a fortuitous pairing--or as everyone likes to say these days, partnering.

reasons for kids not being there - yes possibly exams, but forget a crucial factor, my guess - the IPL. its full family entertainment.
also the word spread amongst parents - the movie is too dark for kids, its not a 'for kids' movie. we only went for it as some friends were going and because our 7 yr old insisted she was fine with dark scary stuff.
exams / IPL / Dark... no wonder kids stayed away

Jaimit, I didn't think it was darker than Harry Potter 3, 4 or 6; but kids find characters to identify with in the Harry Potter stories, not sure if that is the case in Alice in Wonderland (or in any Tim Burton films for that matter).
Still, the movie's a huge hit in the States and Europe, so there must be something kids and parents like about it.
About the IPL, agreed, free family entertainment at home.