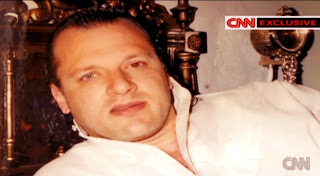 The way the Indian media have covered the David Headley case, it would appear the US FBI betrayed us by unravelling a major strand of the November 2008 attack plot, arresting the man behind it, getting him to plead guilty and reveal details of the plan. This column by Barkha Dutt is typical of the general Indian reaction. With Manmohan Singh in the US for the nuclear summit, we are mainly concerned not about the future security of the world, but about whether the US will grant Indian investigators access to Headley.
Hey, how about properly interrogating people we arrest in our own country, rather than subject them to useless 'brain mapping' and 'narcoanalysis' tests? How about creating an intelligence network that brings to justice perpetrators of dozens of terrorist acts that have gone unpunished in this nation? How about training our police and paramilitary forces so they don't end up being trapped and massacred during an operation in which they were supposedly the hunters?
We have decided that Headley got a cushy deal before he's even been sentenced, and that the FBI is hand in glove with its 'rogue agent'. If that is indeed the case, what's the point of Indians asking him questions? Surely his handlers will have told him what to say.
Posted by Girish Shahane Girish Shahane at 9:54 AM

So true. Haha read this somewhere "if Tom Hanks and Stevan Segal could have a son together, this is what he would look like!"

Have you seen any other human with eyes of two different colours? I thought it only happened with cats.

Bowie's eyes look different, but not because of their colour. Just checked, and the story is he got into a fight in his teens which led to his left eye being damaged.