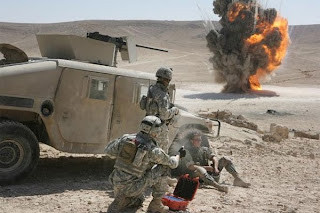 There's a moment near the end of the Lord of the Rings -- it goes by so quickly, maybe I imagined it -- in which the hobbits, back in the shire and celebrating their victory, exchange a look that says, "The shire's normal again, we've got what we fought for, but, having battled the armies of Sauron heroically, can we ever be content in our small, leafy idyll?"
The central character of The Hurt Locker, which I finally got to see two days ago, is addicted to the extremity of war. He's every American kid's hero: a cowboy, an astronaut, a gunslinger, a life-saver, all rolled into one. He's also a profoundly disturbed individual. He volunteers for a bomb disposal unit and, when his rotation's done after he's disarmed some 900 improvised explosives, and cheated death a dozen times, he can't stand the peace of home -- a supermarket packed with goods, a suburban home, the American equivalent for the Shire of the Lord of the Rings -- and volunteers for another round of duty.
I have masculinity on my mind, because I'm due to lecture on the subject tomorrow, and that's the prism through which I viewed the Hurt Locker. One critic has suggested that the film, directed by Kathryn Bigelow, "shakes up traditional concepts of what men are and how they behave." The very opposite is true. The movie functions like an ode to masculinity. The same critic went on to write, "[Bigelow's] deeper interest lies in men's tribal rites and rituals; their fears, posturings and warrior codes; their feelings about sex and fatherhood; their conflicted loyalties and clashing ideas of what leadership and heroism mean. Like one of her inspirations, the ultra-bloody Sam Peckinpah, Bigelow is intimately concerned with the bonds that connect men with each other, and the values that connect them with themselves." This is exactly right, but I don't see how it shakes up any traditional notions of masculinity. What the film does is focus on these issues so relentlessly, they appear as phenomena worthy of dispassionate examination. A two-paced development is thus set up: an intense close-up view of men in combat which is simultaneously a clinical scrutiny of masculine rites of passage. The war, devoid of political context, becomes every war, any war, just as the protagonist becomes Everyman.
Posted by Girish Shahane Girish Shahane at 4:11 PM

But isn't that interesting - I liked it because it dwell so much on war and politics, but men in war and their state of mind.

Though I don't think, the protagonist became Everyman. Because all the three men in the bomb squad react very differently. While his friend is finally convinced that he wants family and fatherhood, it has the opposite effect on the main character.

Or have I misunderstood your point?

I was just about to change the word Everyman, so I agree it is an inaccurate way to describe the guy.

The lecture will probably be over by the time you read this--hope it went well.

Masculinity is a great subject, and it's pretty interesting to think of it being studied by a fairly 'macho' and yet still ravishing woman director. What I wonder after reading your post is, is masculinity a different thing in the absence of women, as in, say, prison, or until recently, the military, or is it the same thing, just heightened or uncurbed or something? Or is masculinity at it's most masculine when there is some feminine to play off of and differentiate itself from? And is masculinity just a cover for something else entirely, which is what I sometimes suspect?

I dont think I liked it as much as you. I dont know what it was but there was something about the whole thing that didnt quite ring true for me. And I dont mean the story which of course is supposed to be cinematic. For me it was more the characters and the dialogue. I think that Hollywood finds it difficult to capture blue collar identity and life because most screenwriters and directors are so far removed from that world. To me the people in Hurt Locker acted the way the cultural elite thought people in that situation would talk and act, but not really the way they would.

BTW in the book of Lord of the Rings they didnt have that disconnect when they got back to the Shire because of course the Shire was under attack.

Did you guys sit around in that pub of Tolkien's and discuss how everything related to the Lord of the Rings? Because I'm guessing that you did.

I was talking to my brother about this last week. He feels that having women in the army makes men behave better because they know that there's an "other" there who might not go along with say petty corruption or covering things up.

It makes me roll my eyes when I see conservative commentators rail about allowing gay men to serve in the military and then they talk about unit discipline and give the example of Sparta. Maybe Hollywood's Sparta was a homophobic cadre, but the real Sparta...give me a break. And dont get me started on the Sacred Band of Thebes.

Seana, Adrian, thanks for the comments, will respond tonight, kind of caught up now.

I'm sorry I missed the talk (wasn't well. Hmph). Like you, I don't entirely agree with the critic you've quoted but perhaps the shaking up that they're talking about refers to the curious mix of unreliability, mania and success that Bigelow packs into her central character. His single-mindedness makes him undependable and irresponsible, whether you see him from his team mates' perspective or his son's. It's a far cry from the usual war hero and, as the article notes, it's interesting that the characters who would usually be considered in the heroic mould are killed within minutes while our "pragmatic" gent soldiers on.

And Chronicles of Narnia might be a better parallel than Lord of the Rings. Especially in the film version of Prince Caspian, Peter is rather in love with his military avatar and waaaaay too fond of waving that sword around.

Seana, males definitely change their behaviour when females are around. Whether they do so in predictable ways I'm not certain about. Also, once females are accepted as part of the crowd the behaviour reverts to some degree to the 'males alone' format.
Adrian and I never discussed Tolkien in the famous pub. In fact I'd only read the Hobbit in my childhood, read the Lord of the Rings about two years before the first film in the trilogy was released.
Adrian, you're probably right about the blue collar stuff; since you've lived in the country you feel it much more keenly than I do.
Anonandon, I think that mix you mention is key to male behaviour. Where does heroism topple into folly? To what degree are people fighting for a cause and to what degree from an inner need? If a story moves an inch this side, you get John Ford, and inch the other side you get Sam Peckinpah. Bigelow stays dead centre, keeping both option in play, which is why, in my opinion, the film as a whole becomes an examination of masculinity.
About Narnia, I see your point; I picked Rings because it seemed to mirror the idyll / battlefield dichotomy better, but in terms of wanting to return to the fight, Peter's the man.

I wonder if the predictability has something to do with the expectations of the women. Which of course leads to wondering what Bigelow got out of the male actors that a male director might not have, and of course, what by the same token, she couldn't.

It's very striking in The Pacific, the current HBO show about the U.S. war in the Pacific,that there are no women, and also that because of the present military, we notice this more.

Girish and I definitely had at least one drink in the Eagle and Child pub (where Tolkien and CS Lewis first read their stuff) even if Girish doesnt remember it.

However this was 1993 7 years before Peter Jackson made the Lord of the Rings hip, so I doubt very much that we talked about LOTR.

Well, it's as well. If Girish had really been a Lord of the Rings fanatic, you might not have met the future Professor Garrett, and for all I know, you might still be sitting there. Although I think Girish would probably have moved on. He seems sensible in that sort of way.

It's a fantastic name for a pub, though, whatever else.

I remember being part of a group including you at the Eagle and Child, Adrian. As you say, we didn't discuss Tolkien.
Seana, he hooked up with Leah early, I have a funny picture of the two in the LMH MCR, obligatory red eyes and all.

I have no clue whaqt the LMH MCR is, but I get the general idea.

Thanks. I was sure it was going to turn out to be the most famous site in Oxford or something.