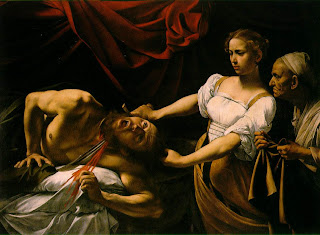 I envy my friend DS who is in Rome right now, because she's seen a Caravaggio exhibition that I will miss. He's one of my three favourite painters; and though I've seen most of the canvases in the exhibition at different times and places, it would be fabulous to view them all together. Ah, well, the show will probably travel to other destinations and I hope to catch it in one of those.
Caravaggio died in July 1610, which means it is 400 years since his demise. The Scuderia del Quirinale in Rome obviously put this show together with the anniversary in mind. I can only guess how long it took to gather the paintings necessary to make a worthwhile display. Caravaggios are pretty hard to come by, and museums that have one or two (outside of Rome it's hardly ever more than two), part with these prizes very reluctantly. I'd say the idea was put in motion about two years ago at least.
Which brings me to the 50th anniversary of Maharashtra, which is being celebrated tomorrow. The Congress - NCP government which rules the state, and the Shiv Sena which rules Bombay's Municipal Corporation, were obviously not thinking of this occasion back in 2008, when prep should have begun. I got a call two months ago asking me to contribute to a publication commemorating the anniversary. I'd have refused anyway, since I avoid any connection with government stuff where possible, but I was gobsmacked that they were beginning to commission articles in March 2010. Near my home in Shivaji Park, the Sena is putting up some kind of mural depicting, what else, Shivaji's victories. The path around the park is dug up for the latest bout of beautification, guaranteed, like previous ones, to leave the place uglier. Nothing's ready in time, even though the things they're doing require only a few weeks work.
Forget Caravaggio, there are people who buy tickets for their next vacation a year in advance, despite the possibility of volcanic ash or protests by Red Shirts throwing their schedule out of gear. The anniversary of Maharashtra's founding was not going to shift because of inclement weather, so why not plan ahead?
Posted by Girish Shahane Girish Shahane at 10:45 PM

plan ahead and our govt ? oxymoron no?SA

I know you are a Caravaggio fan and actually was upset that you were not seeing this. It was really really special to see so many together, and excellent audio guide that sent you back and forth as it cross referenced paintings and histories. Never been so exhausted at the end of an exhibition and the organisers thought of that cos they had large resting places where you sit and re listen to some commentaries or just gather your senses which were pretty much blown by what you'd just seen.
Really wished you were there! could have had a live art history class as well! The contarelli chapel in the chiesa san luigi dei francesi was wonderful ( and crowded but kicking myself for not making it to the church off the Piazza del popolo...it was round the corner and I kept pushing it off for later.
The Whitfield Fine Art Gallery in London is having a commemorative exhib as well of Caravaggio's contempoaries. Check out their website.

and nice you chose the Judith /olofernes image. That's the one I stood the longest in front off.

Had to be a beheading; don't care for his pretty boys too much, aside from the naked angel.

Contrast this with Gujarat, where Narendra Modi did initiate proceedings two years back with a function in the hometown of Gujarat's first CM, Jivraj Mehta. The preparations reached a crescendo with Modi sending out senior Gujarat ministers and members of parliament to various states to invite the non-resident Gujarati back home to the "vatan" to celebrate their Gujaratiness.

The celebrations ended yesterday, and from all accounts were a huge success. The "Swarnim Gujarat" website itself is worth a look:

oh and girish, just read the last bit. I bought my ticket the day I went to exhibition. clearly like the Maharashtra government I am not that organised either. jai caravaggio.
and will return to our beautified nepean sea road soon. when I left, they were still digging in front of our gate laying storm water drains a year and two months after they first brought the bull dozers in.
rajeev and co were huddled contemplating the scene. but I have lost faith and I am dreading more "ulta pani" in the first heavy downpour.