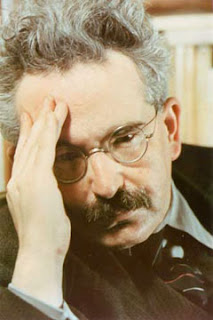 If the world of critical theory venerates one secular saint, it is Walter Benjamin (1892 - 1940), a Jewish-German philosopher who grew famous in Anglophone countries following the publication in 1968 of a volume of translated prose edited by Hannah Arendt. The book, Illuminations, contains an essay titled The Work of Art in the Age of Mechanical Reproduction which is probably the single most influential composition within the domain of the visual arts (a text of the English version is available here). I read this essay first in my teens, and it became an important touchstone for my M.Phil. thesis about the European avant-garde's relationship with technology. When my German grew sufficiently fluent, Benjamin's essay was among the first pieces of literature I read in the original, along with Kafka's The Trial. Unfortunately, those language skills have atrophied through disuse.
Over time, I have grown increasingly suspicious of the merit of Benjamin's argument, and come to believe its influence today is mostly pernicious. Last August, at a seminar coinciding with the Art Summit in Delhi, I outlined why I felt the way I did. An expanded version of that talk has recently been published as the lead essay in the latest issue of Art India magazine. It is now available online, and those interested in a 4000 word critique of vanguardism might want to take a peek here.
Posted by Girish Shahane Girish Shahane at 11:53 AM

This looks very interesting, and I will try to tackle it in a few days when I have more time. I am actually not all that familiar with Benjamin's writing, though he was a bit in vogue here in the bookstore a few years back with a couple of my friends. I did read Jay Parini's novel, Benjamin's Crossing, which takes us through his final days. No doubt some of Benjamin's thought did rub off on me at the time, though of course I don't remember it, but maybe it will rise to the surface when I read your essay.

For some reason I became quite interested in his book The Arcades Project, which became available again in some new translation at around that time. But I didn't actually read it.

Seana, over the past few years, the Arcades Project has overtaken the 'Mechanical Reproduction' essay in terms of influence. But it's extraordinarily lengthy, over a 1000 pages long, so I don't blame you for not reading it.

Hey, it's all about shopping isn't it? How bad could it be?

Just kidding. I hate shopping. I think I was romanticizing the vanished Les Halles.

Hehe. You've touched on something I find interesting: Why do people who love the idea of flaneurs wandering the arcades criticise contemporary versions of the same experience? Maybe it is Paris that makes the difference...

Yep, I think Paris might be the salient factor here.

that was delightful! especially the way you delineate the use of the term 'democratic' in current academic and art discourse. it just makes me cringe every time I hear it said. the other word is 'radical', but that's a different story!

"'Radical' is among the most overused and misapplied terms in academia... Sprinkled liberally through a text, the word transforms the most conventional ideas into incendiary-sounding propositions, in the way that monosodium glutamate imbues even thin soup with a hearty, meaty taste.":
http://girishshahane.blogspot.com/2008/12/ravi-varma-radical-part-1_27.html

I finally had a chance to sit down and read the article, Girish. I liked it very much, and feel that my former art history professor from UCSC, Mary Holmes, would very much approve.It's odd, now I think about it, that at a school which in some ways must now be one of the quintessential identity politics places of study, I somehow managed to find the one professor who said that much of it was balderdash.

It would be interesting to hear what a contemporary Benjaminist would have to say against your argument, though.

Thanks for taking time to read it and respond, Seana.
I, too, am waiting for a rebuttal from a Benjamin votary. A few people have told me they disagreed with some parts of my argument and would get back to me once they had time to collect their thoughts, but so far nobody has defended Benjamin against this critique. I will keep you posted.

Just read a criticism (wouldn't call it a critique, since it presents no coherent argument) by Amit Rai, calling my essay irrelevant, banal and badly written. I present a paragraph from his own post about my essay, and leave it to readers to judge which of us writes badly:
"Reverberations and mutations in ecologies of sensation gets us out of the docility/agency binary that Shahane, and much of cultural criticism in South Asia and North America, is trapped inside. Sensation, emerging through its ecologies of media, biomass, weather, bacteria, neurons, populations, energy, and information, gives us a certain probability curve with regard to the real, but its other only gives us the possible, not the virtual in Deleuze’s sense. For the thought of the virtual to emerge from diagramming ecologies of sensation."
The entire post is here: http://tinyurl.com/2dsok89

Amit Rai has not linked to the Benjamin article, by the way. Had he done so, his readers could have accessed my entire essay and decided for themselves if it's banal and irrelevant.

Deleuze? Oh dear! Well beyond the field of my competence, I'm afraid. And that paragraph struck me as unreadable. Sensations of bacteria? I'm lost.

I don't mean to be flippant about alternate interpretations, but this one strikes me as, well, delirious.

On the other hand, it's gratifying to raise such a strong response, I suppose. But thank God the French theorists hadn't really hit California while I was at college. I have nothing against the theorists, but I find them largely incomprehensible.