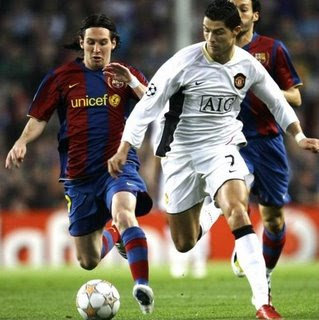 On May 2 last year, Jabeen and I were waiting at Esfahan's bus terminal for our overnight coach to Tehran. On a snowy television set, a maulana droned a sermon watched by two or three pious travellers but ignored by the majority in the room. Suddenly the picture changed to a football match, and the excited commentary got everyone's attention. Once people saw FC Barcelona were playing Real Madrid, they gravitated to the TV, and soon the seats in front of the screen were all taken. Madrid went ahead to cheers from some of the viewers, then Henry scored for Barca to even greater applause, and Puyol followed up with a goal immediately after. When the bus came in a few minutes later, the rapt audience was reluctant to board. Messi put in a third goal just as we exited the terminal, and a home defeat seemed certain for Madrid.
That match ended 6-2 in Barcelona's favour, and pretty much decided last year's winners. El Clásico returns today as Barcelona travel to the Bernabeu, and the two Spanish footballing monsters are closer than ever in the league. After 30 games, they are tied on 77 points, and Madrid leads the standings by virtue of the slimmest of goal differences: 57 to Barca's 56. To get an impression of how far ahead of their other opponents these two are, consider that third placed Valencia are over 20 points behind; and Sevilla, in fourth, are on 48 points, virtually 30 points adrift of the league leaders.
Here's the bummer: I will not get to watch the match tonight because no Indian satellite channel has shelled out the million dollar asking prize for La Liga telecast rights. It's a travesty, really. I mean, what's a million dollars for networks like Star Sports? For years, one could tune to Ten Sports or ESPN around midnight and find Zidane or Eto'o or Ronaldinho working their magic. These days I take for granted that any event in any sport I want to watch will be streaming on one of the eight or nine sports channels to which I subscribe. Hamilton, Federer, Kobe, Tiger, they're all out there. But Messi and Christiano Ronaldo are not. Makes me wish I was in Iran again.
When I wake, I'll go to YouTube and watch the goals. So, go Barca, teach the fat cats at Real that money isn't everything.
UPDATE: They did it, 2-0, helped by two brilliant passes by Xavi. The first came from a one-two with Messi. Two Barcelona forwards were offside, and so Real's defenders thought they had everything under control. But they didn't catch the tiny guy whizzing by to chest the ball down and score with his weaker right foot. The second came when Madrid were pushing forward to equalise and got caught on the break.
Posted by Girish Shahane Girish Shahane at 2:37 PM

I too will be on YouTube first thing tomorrow. For those who like to keep up to date with all things football related can I suggest the excellent Guardian podcast, Football Weekly.... The host's killer double entendres alone are worth the trouble of downloading.

Hope Barca won. We were in Barcelona when Barca won the 2006 EUFA cup beating Arsenal and we watched catalunya plaza fill with cheering crowds from our hotel balcony. Then went down and joined in the celebrations that marched on into the Ramblas. I think they partied all night long! Then, the next afternoon Raian was thrilled as we watched the ticker tape parade and Ronaldinho and co atop an open bus. Made his summer.

I remember that final well; I was rooting for Arsenal, but they were down to 10 men within a few minutes, and, though they then went ahead by a goal, it never felt like they'd manage to hold on. They seemed to lack self-belief.
Thierry Henry could have sealed his place in football history by scoring from one of the three great chances he had; but he seems never to bring his A game to the most crucial matches. He's been part of teams that won the World Cup, the European Cup and the Champions League, but not done much in the finals of those events.
Pity, because I'm a big fan of his.