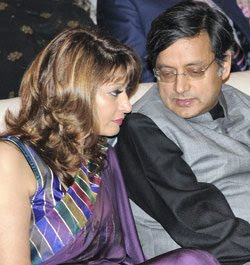 King Pyrrhus, after defeating the Romans at Heraclea in 280 BC, is supposed to have said, "If we are victorious in one more battle, we shall be utterly ruined". Lalit Modi is now tasting the bitter fruit of his Pyrrhic victory over Shashi Tharoor. It may be that he had no choice but to fight. Having failed to stage manage the supposedly open auction process, he took aim at the winning Kochi team's weakest link, the relationship between Shashi Tharoor and Sunanda Pushkar, in order to make good his alleged promise to the Adani group which had failed to gain a franchise.
By revealing the names of the Kochi group's partners and their stakes, he created a demand for more openness about IPL finances in general. That kind of scrutiny is the last thing any of the franchisees want, and the Board of Control for Cricket in India is equally reluctant to face it. I recall, when Sharad Pawar became head of the BCCI, he promised to put an end to Jagmohan Dalmiya's legacy by bringing transparency to the Board's functioning. He spoke, if I remember right, of hiring McKinsey to create a vision of the future of Indian cricket, and to place that report online. The BCCI, one of the richest sports bodies in the world, has a barely working website to this day. The McKinsey report, if it was commissioned and prepared, has been quietly buried.
A month ago I wrote of the beginning of the end of the IPL, and readers said it was a premature judgment. That it might have been, but the point was that if huge amounts of money was being paid for franchises, with no possible way for the investors to turn a profit, we were entering really dangerous territory. I recommended that existing investors should exit immediately, because they would never get such high valuations again, and I believe I will be proven right.

Hypnotised by the Tharoor - Modi battle, the media underplayed the bombs that went off in Bangalore just before one of the matches. It was obviously a massive security lapse, but I don't see any investigation of who was to blame. Nobody died, so we think of it as a minor incident. But what if a small explosive went off during a game? I've been to enough such events to know that there's a stampede waiting to happen at one of them. There's absolutely no system in place for an orderly evacuation, and any panic will doubtless cost dozens of lives. So now they've moved the semis to the 'home ground' of the Deccan Chargers, who weren't allowed to play in Hyderabad because, let me see, Lalit Modi decided bombs might go off there.
This IPL started with the Pakistani player fiasco (so much for open bidding), moved to the Kochi franchise scandal, and developed into a security disaster. And yet, every day, commentators laud Modi for running the IPL smoothly. Only in India.
Posted by Girish Shahane Girish Shahane at 10:37 AM

I think you are fundamentally wrong about the valuations of IPL teams.

They are NOT that high.

India is easily one of the biggest economies of the world. And it has ONE sport, 8 teams. Thats all.

India can support 8 teams with very high valuations. I agree they are not really sane valuations -but those of teams rarely are. Sports teams are often valued for the 'show-off' factor that the owner of the team gets.

You say the valuations are not sane, but also say I'm fundamentally wrong when I propose they're overvalued. This means you think insane valuations are fair value. Strange.
I'd linked to two detailed analyses in my earlier post. They provide details of why the valuations make no sense, no matter how large India's economy or important the place of cricket within it.
If the teams were owned exclusively by the likes of Ambani and Mallya, I'd understand the show-off value bit. But they aren't owned only by the likes of Ambani and Mallya.

see you should've done those bllog posts on the conflicts of interest !
S ANAND

SA, I agreed with your comment that conflicts of interest were important, but the rot is much deeper than that.

Agree with you on some points but I don't think investors would back away from IPL, Why would a guy like Mukesh Ambani run away from a 115 million dollar investment which is more or less a pocket change for him? same is the case with Mallaya and more or less the rest, After the initial fracas of IPL 1 and IPL 2 , IPL 3 in my opinion has launched it big and trust Modi to shoot his own foot!!! I think the ego of the megarich will keep going forward irrespective of the economies or whether they bring any profit into it or not. If anyone of the owners feel the pinch, it should be the Rajasthan, or KKR and if he has a shortage of cash, SRK can sure dance at any wedding or sell some more face creams. Srikanth

Superb post, and good point about the male cheerleaders, formerly known as commentators.

Nothing saddens me more than to see the descent of Sunil Gavaskar from a forthright, incisive critic of the game to a walking proof of Pavlovian conditioning: a sight of Lalit Modi sends this former great into an orgasmic shudder, and praise beings to spew from his mouth, like saliva from a dog's mouth on seeing meat, or saliva from our politicians' mouths on seeing 2G and 3G auction opportunities.

Perhaps I expected too much from the likes of Gavaskar, the signs of rot were visible last year when he happily embraced the sick practice of branding sixes (DLF maximum) and moments of action (Citi moments of success/disaster). Gavaskar used to once claim to be furious when the traditions of the game were threatened (e.g. one of his many autobiographical books contains description of the fit he threw when he saw a non-member of the team sport an India blazer). Now he has no qualms to sell his soul for a few dollars, to replace commentary with virtues of brands.

Just waiting for some pop-sociologists to show how Gavaskar is the symbol of a modern, changing India (over the past week, we've been treated to
how Lalit Modi, Shashi Tharoor and even poor Shashank Manohar are such symbols :-) )

@girish: maybe the use of the word sane and fundamentally was wrong -- blame it on sleep :)

the point I was (badly) trying to make is that sports teams are often over valued because rich people want to show off. India being the huge economy it is, and only 1 sport with 8 teams -- there is a *lot* of money going after very few things. Thus, the valuations make sense.

Sure, tomorrow Sahara might fail -- but there will always be the next Indian with his millions who wants to show that he/she has arrived.

How has IPL turned into a security disaster? A small bomb going off without any major damage is not a 'disaster'. Although, it is a seroius issue and a security lapse but let's not get carried away by using fancy words. 26/11 was a security disaster and so was 9/11.
the thing that you have said about DEccan Chargers home ground being shifted because of a 'bomb scare'.

Again, LETS NOT GET CARRIED AWAY. The venue was rightly changed because there was and still is a lot of tension over the Telangana row. If according to you a matches did take place in Hyderabad and clashes broke out between the police and the telangana supporters, what would have happened. In India you never know when the winds change their direction, there was no point to risk the lives of thousands of spectators and athletes just to prove that Hyderabad was safe. Such antics should always be eschewed.

Well, firstly, Modi wanted IPL II in India although he was explicitly told the show would be targetted during elections and the government could not provide security because it was needed for election duty. Conversely, the government as well as pro-Telangana activists gave explicit assurances that they would avoid inconveniencing IPL events, forget targetting them.
It is precisely the attitude that 'a small bomb going off without any major damage is not a disaster' which eventually leads to a huge loss of life.