Rahul Srivastava, a friend of mine who majored in anthropology and was the first director of PUKAR (Partners for Urban Knowledge, Action and Research), has helped set up a new consultancy called Urbz, which works on the principle of 'user generated cities'. He has written a number of articles on this theme, frequently in collaboration with fellow-Urbz member Matias Echanove.
PUKAR is doing some important work in urban regeneration, and I'm sure Urbz will also make a substantial contribution to the field. Nothing I write in this piece should be taken as belittling their achievements or intentions. I do, however, have fundamental differences with Rahul's view of city development. Take the issue of slums in general and Dharavi in particular. The subject is on many minds because of the stark visuals seen in Slumdog Millionaire. Rahul and his partners at Urbz have an unusual take on it: "Often dubbed “Asia’s largest slum,” Dharavi is in fact a heart-shaped agglomeration of primarily informal settlements that bustle with economic activities. It is located literally in the heart of Mumbai, India’s commercial capital." Let me first voice a pet peeve about the use of the word 'literally'. Why do people always use it when they can't mean it literally? As in, 'I literally died', or 'literally in the heart of Mumbai".
That trivial matter behind us, let's analyse the purport of the sentence. Dharavi is called Asia's largest slum, while IN FACT it is not a slum at all but something else. An agglomeration of primarily informal settlements. In another essay, published in Art India magazine, Rahul and Echanove go further, speaking of "millions around the world who actually live in villages that are misrepresented as slums."
The enemy of informal settlements is, of course, the planned township. In good postmodern fashion (see my previous post for more on that), Rahul and Echanove (R & E) favour bottom-up, incremental development in consultation with communities, rather than any master planning by state agencies. They take as a model the development of Tokyo after WWII, where local activists and residents designed precincts because the government had other priorities. The gulf between Tokyo and Dharavi, though, is immense. Tokyo was devastated by bombing during the war, and so citizens had a clean slate of sorts to work with. They stayed within the law, maintained high construction and hygiene standards, and were provided requisite utilities. Dharavi, on the other hand, is an overcrowded mess of shanties built illegally on state land by residents who, for the most part, have to contend with pathetic sanitation facilities. In fairness, I should clarify that all my knowledge of Tokyo is second-hand, I've never visited Japan. If anybody has been there and feels the comparison with Dharavi is apt, please let me know. I doubt, however, that any Tokyo neighbourhood looked like this after it was rebuilt: 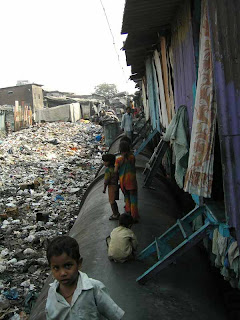 This photograph was taken by Matias Echanove, who knows both Tokyo and Dharavi well.
In their Art India piece, R & E hold up the bazaar as the ideal metaphor for the city, writing, "No wonder the bazaar is making a comeback in post-industrial cities: farmers' markets, music festivals and the like appealing to an increasingly cosmopolitan and bohemian generation...". They then provide the example of the Bombay Bazaar in Tokyo, a restaurant that "is part of a new group of venues that have adopted slummy-looking vernacular architecture as a fashion statement." Slumminess tends to become a fashion statement when there aren't any actual slums around.
I love comeback bazaars like London's Borough market myself. But the fact is they cater not to the clientele that farmers' markets originally did, but to prosperous citizens who can afford handmade oatcakes, organic heather-fed lamb and seaweed-eating hogget. The rustic feel of Borough market is cherished by those who have grown up shopping at Sainsbury's. It seems an odd model for places which have till very recently not experienced the convenience of modern retailing. R & E decry the clinical design of planned neighbourhoods, but they fall into the trap of glorifying its opposite. A bit like India's communist parties which support dubious regimes like Iran's theocracy just because they are anti-American.
In critiquing the antiseptic, R & E end up glorifying the septic.
Posted by Girish Shahane Girish Shahane at 9:21 AM