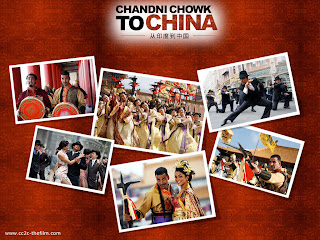 Saw the film last evening and wanted to enjoy it. Because I like Akshay Kumar's goofy smile and pretty much everything about Deepika Padukone. Unfortunately, Akshay spent most of the film shedding tears, and Deepika appears to have spent most of the time since Om Shanti Om gaining weight. She's lucky that, like Manisha Koirala, added kilos don't show on her face.
He's definitely too old for roles like this. Recall the scene in Tashan where Kareena Kapoor reveals she is his childhood sweetheart. He looks puzzled, as if wondering "How come you've aged only ten years to my thirty?"
If you want to know what Chandni Chowk to China is like, think Manmohan Desai formula flick meets Kung Fu Panda. It's a promising mix, and the movie is consistently adequate, but never exciting, hurt by tepid songs and dances, unimaginative sets and shoddy special effects.
If the brain-dead Singh is Kinng could be a hit, Chandni Chowk to China deserves to do well at the multiplex. There's little else to say, except that the Great Wall of China is NOT visible from outer space.
Posted by Girish Shahane Girish Shahane at 6:26 PM

I guess it is doing well at multiplexes.... we went to see Australia today,the 8.15 show and the chap in the booth said sorry its been switched to CCtoC. Not a masala film fan,tho agree DP is very agreeable, we wasted money trying out the new food court at Inox and are home now utterly dissatisfied with the evening.But still better off than sitting thro some Bollywood MSG. :)

On Padukone: Is it just me, or does she indeed have a very strange diction when speaking English? She seems to stress her Ts & Ds in this harsh way that is terribly unsexy. Or maybe, in an airplane, everything seems unsexy...

That Inox food court is awful, isn't it? Like some government institution's cafeteria from the 1980s; at least that's what it felt like the last time we were there.

Girish, did you see Aamir's Ghajini...would love to read your take on it!

Hey Shampa,
Great to have you here. Haven't seen Ghajini yet, did you like?

I rather like her accent. But then you'd have guessed that since I wrote I liked pretty much everything about her.