A few days ago, President George Bush invited the three living former US presidents to the White House for a meeting with Barack Obama. 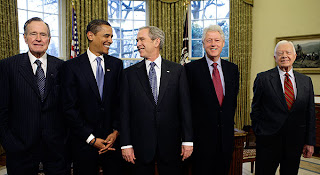 They chatted before the cameras for a fair time, but none of the others so much as looked at Jimmy Carter, who stood uneasily at a distance from the main group. I can't help feeling that the weird body language had something to do with the current violence in Gaza. Carter has written a book, Palestine: Peace, Not Apartheid, which places him at the fringes of the American political spectrum: way out left, like he was in the presidential gathering. The others in the meeting might have many foreign policy differences, but they have all been at pains to register their unwavering support for Israel. Perhaps even looking toward the only Nobel Peace Prize winner in the room and smiling would have sent wrong signals to the incredibly powerful pro-Israel lobby.
Ironically, Jimmy Carter has done more for Israel's security than perhaps any non-Israeli alive. The greatest achievement of his presidency was the agreement at Camp David, signed by Menachem Begin and Anwar Sadat, which led to the normalisation of relations between Israel and Egypt. The land-for-peace formula established at Camp David became a template for future deals, but none of the agreements signed after 1980 proved as robust as the Egypt-Israel detente, which has endured for three decades.
Carter put his reputation on the line to push the agreements through, extending the deadline for negotiations, patiently going back and forth between two leaders who hated each other. They got Nobel Peace Prizes immediately, he had to wait 22 years for his own gong. Unjust, perhaps, but better than the volley of bullets that was Sadat's ultimate reward for signing the treaty.
Posted by Girish Shahane Girish Shahane at 10:32 AM