The National Gallery of Modern Art, located in Delhi's Jaipur House, is inaugurating its new wing today. A few years ago, the museum's director Rajeev Lochan showed me the plans for the extension . I mentioned the design looked dated, and he explained why. The project kicked off in the mid 1970s. A design was selected in the early 1980s. Virtually the same plan has been executed in the 21st century. In the intervening decades, museum architecture's undergone a revolution with the creation of structures like Bilbao's Guggenheim, Denver's Frederic Hamilton building, and the British Museum's Great Court. 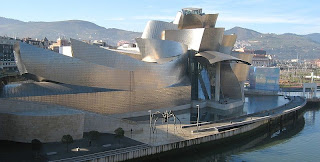 The Guggenheim Museum in Bilbao, designed by Frank Gehry 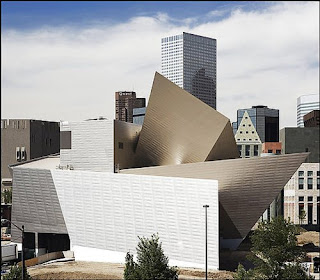 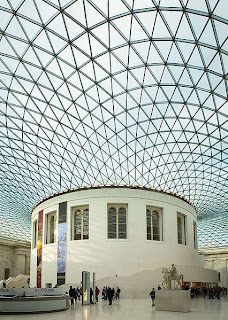 The glass roof of the British Museum's Great Court, designed by Norman Foster

Indians, even those who haven't travelled abroad, might find some of these edifices familiar. Hrithik Roshan danced inside the for Kabhi Khushi Kabhi Gham. And Rajinikanth did a jig in a blond wig before the Bilbao Guggenheim in Sivaji. Will the NGMA extension similarly inspire film choreographers? I doubt it.

Admittedly, a museum's potential as a backdrop for a song-and-dance is not a fantastic criterion by which to judge it. But I do have one yardstick by which to measure the success of the NGMA extension, namely, does it give M. F. Husain's iconic canvas, Zameen, the room it deserves? The painting, first exhibited in 1955 and immediately recognised as a masterpiece, is a little over 18 feet long, not massive by contemporary standards. Yet it has been hidden away in storage for years. It ought to be hung in a space of sufficient depth so its full impact can be felt. If anybody reads this after having visited the new NGMA, please let me know if the architect and curator have done the painting justice.
Whatever the status of the museum, it seems that 's NGMA, housed in the Cowasjee Jehangir Hall, will continue to languish. Two years ago, I distributed a pamphlet at the opening of the show Edge of Desire at CJ Hall. The note, which criticised Rajeev Lochan's handling of the gallery, was to be published in an E-zine due for launch at the time. That website never got off the ground, but I'm reproducing the entire text of the pamphlet in my next blog entry, because I feel it's as relevant as it was twenty-four months ago Or perhaps even more pertinent since we can't expect private galleries to mount substantial group shows during the current downturn.
All the points I made in that appeal have been revalidated in the past two years. An excellent example was the refusal by Lochan to display the Benodebehari Mukherjee retrospective in . Gulammohammed Sheikh, one of 's finest painters, gave up more than a year of his creative life to put together the show in conjunction with his co-curator, the scholar R. Sivakumar. Since the government offered only paltry funding, Sheikh persuaded galleries like Espace, Vadehra and The Guild to sponsor catalogues. The works lay in Jaipur House for months after the Delhi show was taken down, but were never transferred to the empty Bombay space despite repeated entreaties by the show's curators and a number of artists and art lovers. 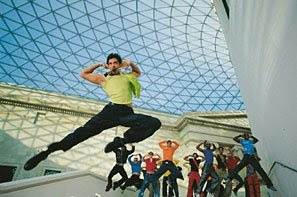 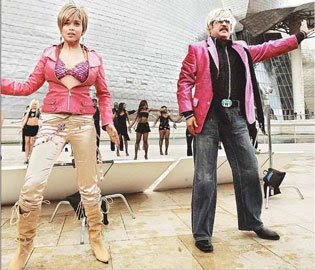 I just find it so shocking that we have a space in South Bombay with real estate prices being what they are , which is ostensibly dedicated to modern art and then just allowed to lie fallow for years. Sheer callousness.
And thanks for the Rajnikant pic ! Tamil films sure get around more than even Bollywood!Heard he is shooting with Aishwarya Rai in Macchu Picchu!