January's been mostly devoid of big name openings, giving lesser known artists a place in the peak-season limelight. The Guild, a gallery that has consistently showcased new talent, has a solo by Lokesh Khodke, which I viewed today. My first feeling on encountering Khodke's canvases was, "Here's a Marathi boy trying to paint like a Mallu." As it happened, a Baroda-based artist was in the gallery, and when she asked me what I thought, I mentioned this response. She pursed her lips in an expression I took to be somewhere between non-committal and disapproving.
Here's a large oil from Khodke's exhibition. 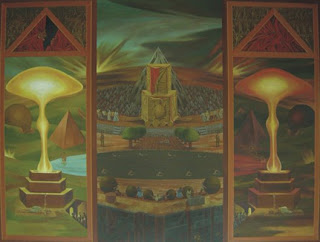 And here's a painting by Ratheesh T., an exciting young artist based in Trivandrum. 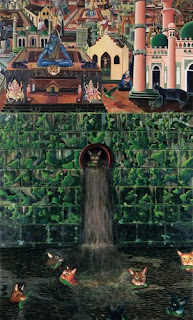 The colours Ratheesh uses jump out at you, and his affinity for the bizarre is entirely unforced. Visual lushness, sometimes bordering on kitsch, comes naturally to many Malayali artists, as does dreamlike or nightmarish imagery. It's easy to connect their palette to the landscape of their home state. Lokesh Khodke, on the other hand, appears to be working self-consciously in a surrealistic mode. His pictures, lacking the quirkiness one sees in Ratheesh, end up resorting to some fairly obvious symbols. The images demand lavish, luminous hues, but he holds back, reluctant or unable to go the whole hog.
Once back home, I read the exhibition catalogue and discovered that Khodke was born and raised in Bhopal, not Maharashtra as I'd assumed. I hope he develops imagery connected to the visual culture and landscape of his childhood and youth instead of following painters who influenced him while a student at M S University Baroda's Faculty of Fine Arts.
Posted by Girish Shahane Girish Shahane at 10:35 PM

Have yet to see the Guild show, this month seems to be the Baroda kids time in Bombay. When you do, would be keen to know what you think of the others at 88, Warehouse and Hacienda. Rateesh's imagery is startlingly complex yet as you say unforced and very resonant of where he comes from. Didn't like most of his first show but subsequent works have demanded a more engaging study and would like to see what he comes up with next time.
Picked up a book on Jeff Wall at the Strand Bk Fair which was disappointing in the selection this time around.

As I am new to replying to blogs(!late start), the link at the bottom, is that put up by you (a freeze is coming) cos you just find it interesting so add it on? Or does google automatically create the link?

Other bloggers can link to my posts, and those will appear at the bottom of the page. Not my doing.