Raza rewards the young and needy

Just got a publicity release that reads, "Raza Foundation, a trust created for assistance and support for young artists in India and exclusively funded by the Paris based Indian master Sayed Haider Raza, has chosen 2 painters, 1 poet, 1 musician and 1 dancer for the Raza award carrying Rs. One lakh each for the year 2008."
The two "young artists" chosen? Atul Dodiya, 49 years old, and Jayashree Chakravarty, 52. Nominating Dodiya is like presenting Roger Federer with the Promising Swiss Sportsman of the Year award. And Chakravarty would be better placed in the jury panel than among the recipients of the prize.
My guess is Atul will donate the award money to a person who really has use for it, but one wonders what purpose is served by giving 'emerging artist' type prizes to internationally acclaimed practitioners.
As a diversion, here's an image of Dodiya's painting, Bindu (After Raza), exhibited at Vadehra art gallery in 2007. 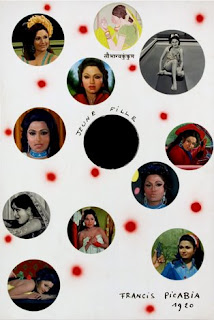 For those who don't get the context, Raza has spent decades painting the 'bindu', or dot, which comes with a lot of philosophical baggage. The Bindu inside Dodiya's dots is an actress of that name. At her peak in the 1970s, she played a variety of molls and bimbettes, most famously Mona Darling in Zanjeer, a film written by the young duo Salim Khan and Javed Akhtar that introduced Amitabh Bachchan's angry young man persona.
Posted by Girish Shahane Girish Shahane at 9:43 PM