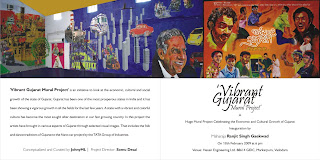 I just received an emailed invitation to view "a huge mural project celebrating the economic and cultural growth of Gujarat". I'd have deleted immediately the notice about this propagandist effort, except that it was sent by an art critic of my acquaintance named Johny ML, who edits the website artconcerns.com.
He "conceptualized and curated" the Vibrant Gujarat mural project, which was executed by ten artists at an industrial location in Baroda. I would never have expected Johny to join the Narendra Modi fan club. After all, not long ago, artconcerns was in the forefront of protests against the arrest of a student from MS University's Faculty of Fine Arts. The student, named Chandramohan, was accused by members of some Hindutva outfit of displaying paintings that hurt religious sentiments. The right-wing thugs entered the campus, roughed up Chandramohan, and damaged a number of artworks. The Modi administration, needless to say, backed the vandals to the hilt. All part of its wildly successful cultural growth strategy, I suppose.
Posted by Girish Shahane Girish Shahane at 11:08 AM