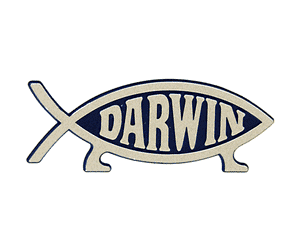 Charles Darwin was among my first heroes. As a primary schooler, I read a Ladybird account of his life, and was deeply fascinated. Beagle, Galapagos, iguana: the words felt wonderful on the tongue. I dreamed of discovering unknown creatures in malarial swamps far from civilisation. As I grew older and realised I had capacity neither for the self-sacrifice nor for the meticulous persistence required for explorations of that kind, my admiration for Darwin and those who followed in his path was reinforced considerably.
Darwin's central thesis of natural selection acting on random variations is very different from, say, the Theory of Relativity. Anybody of sound mind can understand it. It is so simple, in fact, that that any intelligent person living in the early Victorian era might have hit upon it independently, given the right circumstances. The reason nobody did is that, while the mechanism Darwin proposed was elegantly simple, its consequences were so far-reaching as to overturn all traditional notions about how trees, reptiles, insects and humans came to occupy Planet Earth. The idea was so radical that even today, exactly 200 years after Darwin was born, in the 150th year of the publication of his celebrated book On the Origin of Species, and after a century and a half of discoveries that have proved his idea true beyond all reasonable doubt, a majority of people across the globe reject its validity.
I never had a mental block against the idea of natural selection because I didn't believe any of the explanations religions provided for the origin of life on earth. My immediate family members were not religiously inclined. The only time I attended prayers was when an uncle or neighbour installed a Ganapati during the annual festival. I gorged on the modaks made in that period, but the fervent chanting always struck me as faintly ridiculous. I found it mind-boggling that intelligent, well-educated adults could actually believe their prayers would be answered by a deity with a human body and elephant's head.
It was evident that the world was very unfair to some individuals and extraordinarily kind to others; and that the unfairness and kindness did not correlate with any discernible external factor like religious faith, goodness or intelligence. Those who worshipped Ganapati were no better off than devotees of other gods. Why, then, believe in the dogmas of one faith over another?
Once I understood Darwin, life made sense. The facts as I saw them, and as they were observed by people everywhere, could be explained in ways that did not create an infinite regression of questions ("If everything must have a creator, who created the Creator? And who created that Creator?"), or unsolvable contradictions ("If Allah is omnipotent, it follows that he made me a disbeliever. Why, then, will he condemn me to hell and an eternity of torment for my disbelief?"). By the time I turned thirteen or fourteen or fifteen (past years coalesce in memory as one gets older), I was convinced that natural selection was the driving force behind the creation of the varied forms of life visible on earth, and nothing I have read or experienced since has shaken that conviction in the slightest.
I have written this post without using the word most associated with Darwin: evolution. It is, in many ways, a misnomer, implying as it does that some states of being are inherently better than others. It places Darwin in a category that includes a number of misguided thinkers who came before him, like Jean-Baptiste Lamarck, and leaves the door open to criticism that he was not the 'father of evolution'. He wasn't, just as Gandhi was not the 'father of non-violence'. Gandhi's originality lay in demonstrating how non-violent protest could be the basis of political struggle. Darwin's resided in his explanation, backed by hundreds of practical examples, of how life began with extremely simple forms and changed over hundreds of millions of years, without any external impetus, to the mix of simple and complex living things we observe today.
Posted by Girish Shahane Girish Shahane at 11:38 AM